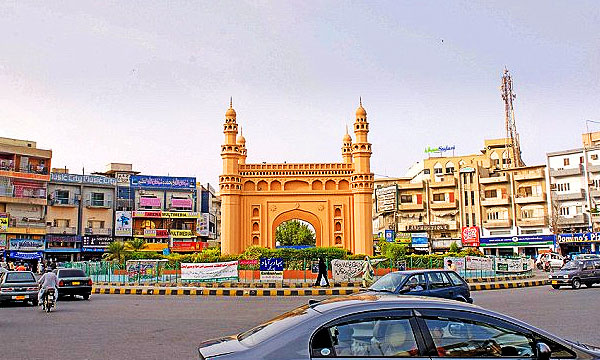 The Daily Mail has published a list of the World’s Top 12 Most Breathtaking yet Bizarre roundabouts and Karachi’s Chaar Minaar (a replica mosque of the Chaar Minaar) Chowrangi at Main Bahadurabad has made it to the list as well.

Roundabouts are mainly a very technical and functional feature which form an integral part of a city’s transportation system.

However, sometimes architects go overboard and beautify and add such an aesthetic to the roundabouts that they become an important, symbolic landmark of the cities.

This exclusive list, compiled annually, is by the UK-based Roundabout Appreciation society and it has been drawn from inspirational road junctions across the globe that are reflective of culture and a diverse heritage.

At the top of the list is the Railway Roundabout in Hobart, Austrailia which features a glorious color-shifting fountain and a beautiful garden. Originally this roundabout was built in order to be placed at the city’s main railway station.

The second roundabout to the list is a roundabout located in Morbier, France. This is the Giant Cheese and Grandfather Clock Roundabout. It features a giant wooden carving of Morbier cheese which is a local delicacy and the clock is made out of plants and looks very appealing.

The third in the list is a Duck Pond Roundabout in Otford, Kent, UK. The pond located at this roundabout is said to be dating back to the Anglo-Saxon times. The roundabout is also termed as the Duckingham Palace. This is the only UK-based roundabout which made it to the cut, despite the fact that this society is from the Great Britain.

The Sixth position in the list is bagged by our very own Karachi’s Mosque Replica roundabout located in Bahadurabad. Surrounded by the busy marketplaces and local restaurants, this is a very familiar site for the residents of the Pakistani Metropolis.

Some of the unique roundabouts included in the list included a flower and fountain roundabout located in Indiana USA, a roundabout that features swimming dolphins located in Portugal, another that has dancing dolphins which are in Thailand and a Mexican roundabout boasts the Angel of Independence placed on top of an 118 ft. column.