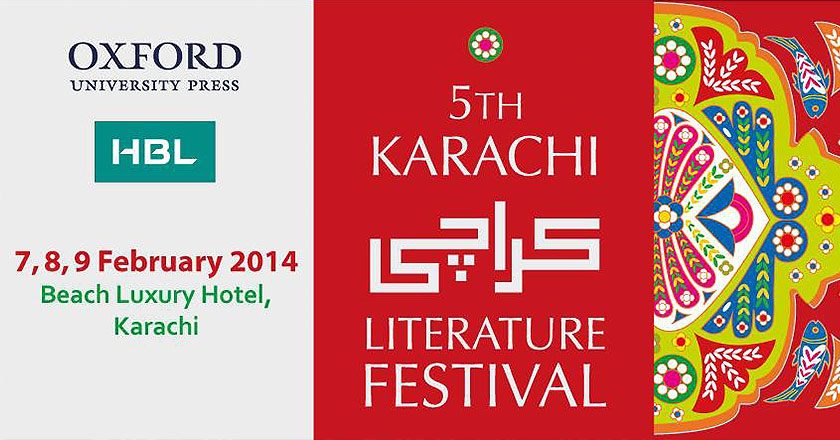 Sindhi, Punjabi, Balochi, Pakhtun is that all that defines Pakistan or is there some more substance behind the country? A key to this question lies in the joint venture of these four culture’s literature celebration, recently held in Karachi by the name of Karachi Literature Festival 2014.

The 5th Karachi Literature Festival, which was recently held from 7th till 9th February at the Beach Luxury Hotel, was a joint venture of HBL and Oxford University Press, targeted towards the promotion of Pakistani literature.

Karachi Literature Festival was organized for the fifth time by Ameena Sayyid and Asif Farrukhi. A literary event focuses over the encompassment of a country’s literature, in terms of writings of different author’s.

KLF 2014 was a similar effort to rejuvenate the literature of the country and promote it within the Pakistani population, so as to remind them of the great literature that they have endowed as their heritage.

The literature festival held in Karachi, hosted 180 Pakistani and 34 International authors from all around the world. The literature festival which began in city of Karachi 5 years ago, initially at its launch welcomed 5,000 visitors, back in 2010; the awareness generated since then generated quite a lot of interest in the books for the youth, a proof of it is the number of visitors that reached from 5,000 to 50,000 within a mere period of 4 years.

The love for books in the hearts of Karachite’s cannot be undermined, as proved by the hosting of this event for the fifth time with a rapid success. Hanif Kureishi, one of the top 50 British play writers, screen writers, film maker and novelist who returned to Karachi after 25 years in order to attend KLF, like many other personalities was found commenting,

“I attend a lot of Festivals, but I have to say that this one’s sense of urgency and the desire of people to speak about literature, about politics, about their country, about their country in relation to other people’s countries — has been particularly urgent and necessary here. I felt a real buzz and a real excitement in this place. And if I wonder — as all writers do every day when they get up and sit at their desk — if I wonder what the hell we’re doing this for, when you actually come to a festival like this and meet readers and meet other writers, you get a real sense that writing is important and that writers matter…”

The event not only catered to the bright side of the Pakistani literature, that is being embraced by the Karachites but it also embraced the dark side of country’s poor education system, which is in dire need of attention from the literate population of the country.

Shahzad Roy, a famous musician and also a social activist, who is much known for representing youth’s voice, was also seen commenting upon the State School Reform’s in the KLF.

The festival also hosted many stage dramas, depicting some traditional Urdu stories like Ali Baba Chalees Chor, staged by young actors. This along with many other stage depictions, puppet show by Ritz Theatre, story-telling by some renowned Urdu story writers, reading & composition and painting competition were some of the interesting things that maintained children’s interest throughout the three day event, thus entitling them to develop interests in their literature from an early age.

Some of the efforts by the hosting of these literature festivals that stirred some positive changes include the increasing interest of youth in book reading, thus guiding them towards a more independent approach of raising their opinions; yet another change that has taken place involves the re-opening of the British Council Library which will further help the young minds to read and think more maturely.

After the great success of KLF, the literature festival moves on to Lahore to enrich the Punjabi soil with the essence of Pakistani literature and festivity.