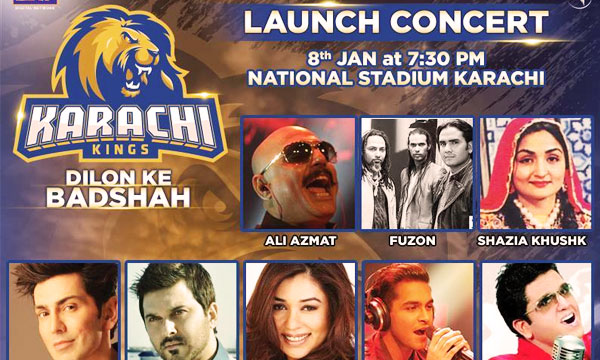 UPDATE:  The team Karachi Kings, one of the most expensive teams of the PSL 2016 panel, kicked off their launch concert on 8th January, with much fervor and zeal. The event took place at the National Stadium, Karachi while the glamorous night was studded with renowned stars who combined music and passion for cricket together.

The concert was hosted by the energetic Fahad Mustafa while the official anthem for Karachi Kings was sung by Ali Azmat. Celebrities like Faakhir Mehmood, Shazia Khushk, Komal Rizvi, Saleem Javed, Fuzon, Asim Azhar were some other performers who electrified the audiences with their charm.

Representing the colour of the team, the event kicked off with high profile guests walking the blue carpet. Celebrities like Umer Sharif and Mathira were spotted at the event to render their support to the team. We also spotted Cricket chacha waving the Pakistani flag.

An amazing display of fireworks was witnessed at the start of the event. Fahad Mustafa invited honorary guests including CEO of ARY and the owner of Karachi Kings, Salman Iqbal, Governor Sindh, Ishrat-ul-Ibad and the nominated mayor of Karachi, Waseem Akhtar. They delivered their speeches, wishing the team all the luck to perform well and bring the trophy to the city of lights.

Governor Sindh Ishratul-Ibad performed the national anthem on a guitar. Watch the video below:

Singers like Ali Azmat, Shazia Khushk and Faakhir truly made the audiences groove and instilled a true feeling of patriotism in the air through their performances.

View some of the images from the Karachi Kings Launch Concert below:

Watch Mohammad Amir’s exclusive interview at the Launch Concert of Karachi Kings below:

Karachi cricket fans had availed all passes for the grand launch mega event. One day prior to the launch, Karachiites had availed all the passes to the grand event. City residents have certainly made it clear how excited they are for the matches being held in Karachi.

The launch was an entire family event for families; the public is entirely geared up to welcome the cricket heroes in the city today. Watch the Live Webcast of the Karachi Kings Launch Concert today at 7.30 PM here.

The owner of the Karachi Kings Salman Iqbal was at ARY’s program 11th hour and said that this team belongs to the Karachi people and it doesn’t matter which team wins as Pakistan will be the end winner, no matter what. He also said that ARY started its success story through cricket and that they have been instrumental in promoting cricket in Sharjah several years ago.

The Nominated mayor of Karachi, Waseem Akhtar stated that the whole of Karachi will support Karachi Kings; therefore, they are hopeful that Karachi is going to win the inaugural season.

Preparations were under full swing for Karachi Kings’ launch concert that was held on January 8th 2015 at National Stadium, Karachi.

Karachi Kings has reaped massive excitement and anticipation from fans not only in Pakistan but globally. Exciting performances from the renowned musicians took place. The Karachi Kings’ DILON KE BADSHAH have pushed their promotional game up a notch through the official launch concert.

The anthem was performed by the legend Ali Azmat and a host of stars performed at the promising night. The official theme was awaited anxiously by several fans and will be released at the event. The gates opened at 4 pm for the general public and the show started at 7:30 pm on Friday.

The famous singer Ali Azmat has put his heart and soul into the official theme song! The concert include renowned stars like Ali Haider, Raheem Shah, Fakhir, Komal Rizvi, Shazia Khushk and many more.

View some images of the Karachi Kings Launch Concert preparations below; Passes are available at KFC Outlets all over Karachi ONLY.

A special message from Ali Azmat: