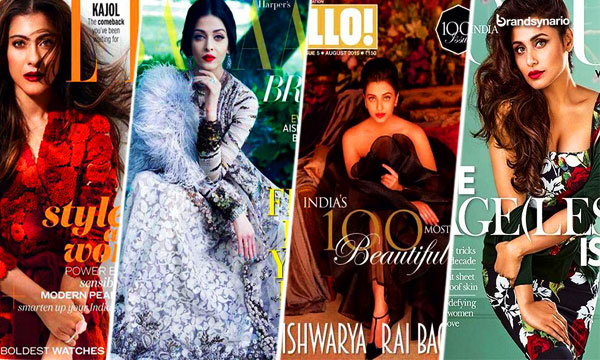 Rani Mukherji, Kajol and Aishwarya Rai are the three Indian Bollywood actresses who have become beauties of yesteryear now. However the three Bollywood beauties have now featured on internationally acclaimed Indian Magazine Covers, and the results are stunning and worth a look. In the recent past, due to marriages and kids, these celebrated actresses from the 90s had been side-stepped by their newer, fresher predecessors but now with bolder and more mature looks, these seasoned actresses are back with a bang.

Donned in a dark crimson Namrata Joshipura floral coat dress, Kajol looks gorgeous and sizzles the cover of Elle Magazine. Over the past few years, the lead actress of Kuch Kuch Hota Hai has been struggling with maintaining her weight. On the cover of Hello! Aishwarya is draped in a black gown. This is the magazine’s 100th issue which features India’s 100 Most Beautiful and there are no second thoughts on who is featured as the Number one most beautiful Indian.

This is undoubtedly one of the hottest avatars ever adopted by the former Miss World. On the cover of Bazaar Bride, wearing an elegant Sabyasachi  gown, Aishwarya simply takes your breath away. The unconventional lehenga and the bridal look renders Mrs. Bachchan an amazingly evergreen look.

With her upcoming movie, Jazbaa where she has created an action-packed avatar, and her comeback on the Indian ramp, Aishwarya is surely back on center-stage for good. Wearing a Dolce & Gabbana outfit and looking sexier than ever, no one would believe the recent Mardaani-actress is 37 and married. The issue highlights her late but fairytale-like wedding of the critically acclaimed actress. The Marcella lip shade and the windswept hair merges to create a very enviable, to-die-for, vintage look.