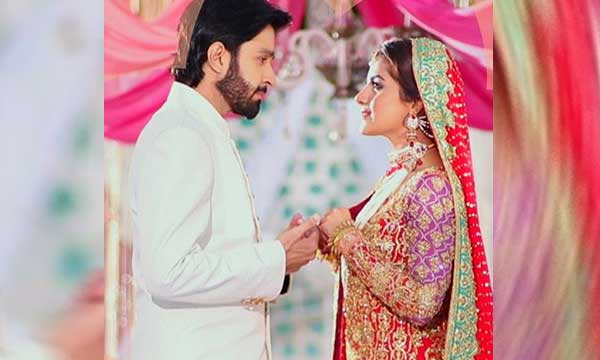 Sohai Ali Abro is back on Pakistan’s television screens after a  hiatus of a year. The actress previously starred in the hit Pakistani movie ‘Jawani Phir Nahi Aani’ and is now have returned to the small screen s in Urdu1’s Drama ‘Kesi Ye Paheli’.

The first episode of the show opens with Sohai as Meeraal, working at an advertising firm. Sohai’s character is of a workaholic women and the only family she has is her aunt, “Aani” played by Samina Ahmad.

Meeru is a competent and a happy-go-lucky girl who is loved by everyone. She is in good terms with her colleagues and the daughter of her boss, Javed played by Saleem Sheikh.

In a turn of events, a colleague of hers, Farhan, gets into a car accident and she rushes him to the hospital. When the patient’s family arrives, Meeru is mistaken as Milli – Farhan’s love interest. The family is heartbroken since Farhan is comatose, uncertain when he’d wake. They accept Meeru with open arms. Guilty for Farhan’s accident, Meeru plays along and pretends to be Milli.

#Repost @urdu1tv with @repostapp ・・・ #KaiseeYehPaheli Starting from the 20th February every Monday at 8:00 pm only on #Urdu1

Sohai Ali Abro’s performance is worthy of accolades. She is totally rocking her new avatar and the powerful cast makes it a good watch. The tale has rightly made us curious about what will happen next. It is a perfect blend of romance, drama, and mystery.

It is always good to see the veterans, Qazi Wajid and Samina Ahmed work their magic on the screen. Let’s see what is more to come from the serial.

In the next episode, we will see Azfar Rehman make his entry in the drama and we will have a look into the leading couple’s history on the show. By the looks of the promos, Azfar might be Meeru’s old fame but we’ll find out soon enough.

Give us your feedback on first episode of #KaiseeYehPaheli only on #Urdu1 www.urdu1.tv

The drama airs every Monday at 8pm on Urdu1.