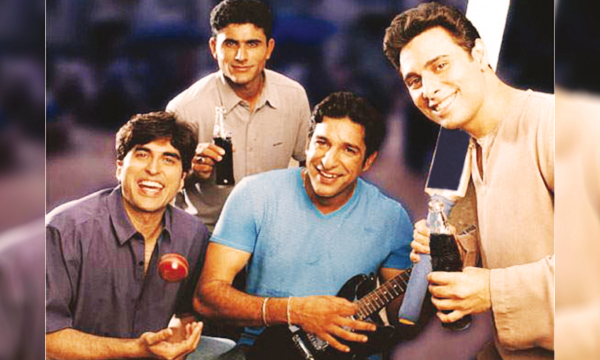 The shocking death of the popular pop icon- turned- preacher ,Junaid Jamshed left the whole world in mourning. The icon lost his life in a plane crash near Havelian city of Khyber Pakhtunkhwa, which was on its way to Islamabad from Chitral.

Before he embraced spirituality and became a scholar, J.J was known as the front man of the popular 90’s band. “Vital Signs”. Jamshed also went ahead to establish himself as one of the most glamorous stars of the 90’s.

Not only his music captured the heart of the nation with hit singles like “Dil Dil Pakistan”, Jamshed was also the most sought after artists by popular brands.

Here is a throwback at some of the most memorable advertisements in which Junaid Jamshed made an appearance.

The singer starred in a Khaleej Time ad  almost two decades ago. With a Hollywood time sequence, the ad will hit you right in the feels.

Shot in the beautiful city of Lahore featuring the Badshahi Mosque, Junaid Jamshed endorsed Zong’- one of the largest mobile networks in Pakistan.

Top 10 Junaid Jamshed’s Hit Songs That are Bound to Make You Nostalgic!

With this ad, we all will get a major throwback. In this TVC, Junaid Jamshed made an appearance with the ever youthful, Mahnoor Baloch for Nestle Everyday.

The four heroes united for one of the most brilliant ads of all time and produced a  song that became an anthem for generations to come.

Pepsi has long been known to brand itself as “the choice of the generation” and what better way to declare it than to feature a pop- band that found a permanent abode in the hearts of Pakistanis!

This cool Pepsi commercial will make you walk down the memory lane. The ad made waves as it starred the band singing at the top of a delivery truck, their hit tune “Dil Dil Pakistan” .

Junaid Jamshed 10 Quotes That Prove He Was an Inspirational Personality: Exclusive Brandsynario Interview

Back in the day, every boy wanted to be a rock star and who could be better to look up to then the hip boys of Vital Signs.

Take a look at this commercial where the singing sensation, Junaid Jamshed flaunted some major dance moves.

The soft drink giant once again paired up with Vital Signs for another commercial featuring their hit single, “Dil Dil Pakistan”.

Before the Ufone commercials employed a stellar cast that became the permanent brand ambassadors for the mobile network, Junaid Jamshed made a memorable appearance in one of the first Ufone commercial alongside comedian, Faisal Qureshi.

After Lays Chips was attacked with allegations of controversial ingredients, Junaid Jamshed made an appearance in this very viral Lays Chips commercial for the global brand.

Which Junaid Jamshed ad is your favorite? Share with us in the comments below.