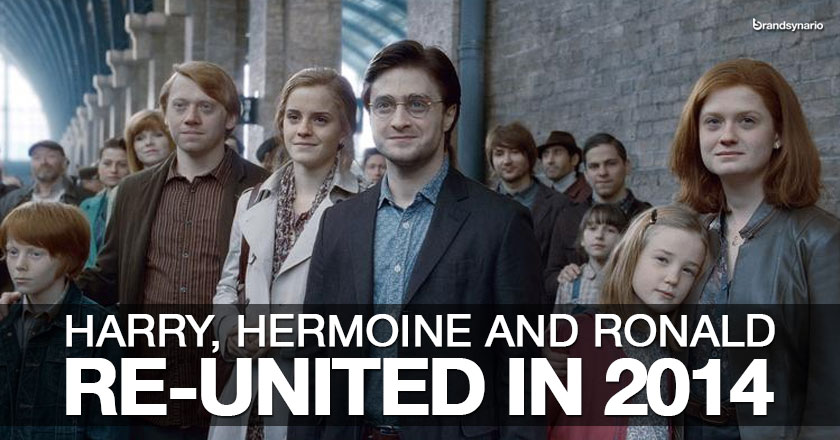 Ever since the last book of the series came out in the summer of 2007, Potter fans from around world over have wanted nothing more than a sneak into Harry’s world all over again.

There have been millions of fictional pieces written about Harry Potter and the rest of Dumbledore’s Army on fan websites but J.K Rowling surprised us all by publishing her version in a 1500 word long story on Pottermore, of what she believes the characters are up to in 2014.

Written in the voice of Rita Skeeter, the Daily Prophet gossip columnist, this is what your favorite wizards are up to.

Harry has “a couple of threads of silver” in his “famous black hair but he continues to wear the distinctive round glasses that some might say are better suited to a style-deficient twelve-year-old.”

He’s also reported to have been sporting a nasty cut above his right cheek due to some secret auror work, of which he would strictly not speak(sorry, Potterheads!).

Ron and Hermione on the other hand, have been happily married and are parents to two beautiful children, Rose and Hugo.

Hermione has been promoted to Deputy Head of the Department of Magical Law Enforcement, and still has far to go!

Ron has, unexpectedly resigned from the Ministry only to join his brother “to co-manage the highly successful wizarding joke emporium Weasleys’ Wizard Wheezes.”

Neville is a popular Herbology professor at Hogwarts and married to Hannah. “Until recently the pair lived above the Leaky Cauldron in London. Rumour has it that Hannah has not only retrained as a Healer, but is applying for the job of Matron at Hogwarts. Idle gossip suggests that she and her husband both enjoy a little more Ogden’s Old Firewhisky than most of us would expect from custodians of our children.”

As for Luna Lovegood, Rita reports that she is “Still delightfully eccentric, Luna has been sweeping around the VIP section in robes composed of the flags of all sixteen qualifying countries.”  Well, can’t say we’re surprised.