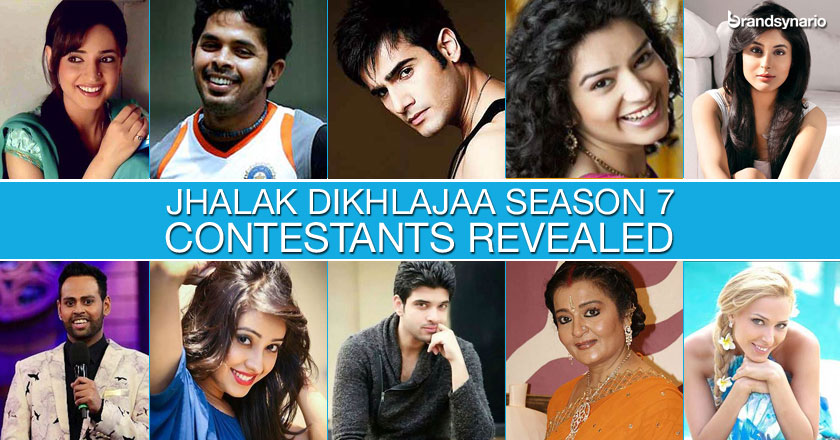 India’s most awaited dance reality show “Jhalak Dikhla Jaa” is just around the corner with its 7th Season.

Like  previous six seasons, the audience is excited and celebrities are hopeful as the show’s team revealed their final contestants list which includes an interesting mix of Indian celebrities from sports, TV and film  industry.

Ashish Sharma – He made his TV debut in Gunahon Ka Devta on NDTV Imagine. Sharma is currently appearing in Colors TV’s Rangrasiya, which also has Sanaya Irani as the female lead.

Mouni Roy – Mouni came into the limelight when she played Krishna Tulsi in Ekta Kapoor’s Kyunki Saas Bhi Kabhi Bahu Thi. She was last seen in Devon Ke Dev…Mahadev, in which she portrayed the character of Goddess Sati.

Kiku Sharda – Kiku plays the character of Constable Mulayam Singh Gulgule in F.I.R. However, he has shot into the limelight with his stint in Kapil Sharma’s Comedy Nights with Kapil.

Shakti Mohan – Shakti was the winner of Zee TV’s Dance India Dance 2. And she is totally going to give other contestants a really tough fight as she talks, walks, eats and sleeps dance. Her sister Mukti Mohan was one of the contestants in the previous edition of JDJ.

Purab Kohli – He started his career as an actor with the television show Hip Hip Hurray on Zee TV and later earned recognition through video jockeying. He has acted in many Bollywood films including Rock On, which also starred Farhan Akhtar and Arjun Rampal.

VJ Andy – Also known as Anand Vijay Kumar, Andy was the host Get Gorgeous 3 and Dare 2 Date on Channel V. However, he gained popularity for his stint in Bigg Boss 7, which was hosted by Salman Khan.

S. Sreesanth – A former Indian cricketer, Sreesanth was a right-arm fast-medium-pace bowler and a right-handed tail-ender batsman. He created quite a strom when he was arrested on charges of spot-fixing during Indian Premiere League 6, after which he was banned from playing cricket.

Akshat Singh – Akshat enthralled everyone by dancing to Salman Khan‘s hit song from Wanted, Mera hi jalwa on India’s Got Talent 5. This 8-year old boy became such a rage on YouTube with his video The Fat Indian Kid Dance that he was invited all the way to US to be on The Ellen DeGeneres Show. Currently he is seen playing various characters in Comedy Nights with Kapil.

The previous judges, Mudhuri Dixit, Karan Johar and Remo D’Souza are still there but the crew is still searching or the perfect host for the upcoming season.