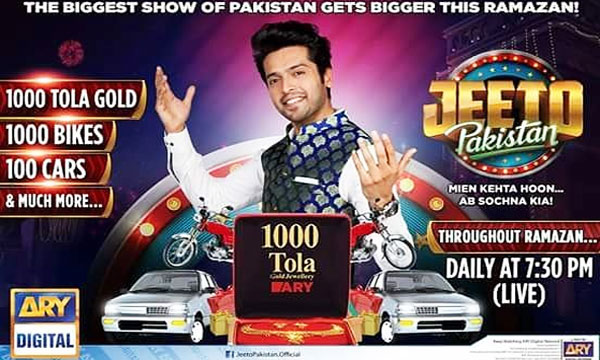 This Ramadan the Pakistan Electronic Media Regulatory Authority has been on the watch for any wrong doings by TV channels in the country. PEMRA has set strict guidelines to be followed by the various media outlets airing Ramazan transmissions and game shows.

It now looks like ARY Digital is now in trouble for airing Jeeto Pakistan before 9 pm and has been served a show-cause notice by PEMRA. Recently, the regulatory body also issued a notice to Geo TV for the same violation.

The notice sent by PEMRA states:

“ARY News aired quiz programs on May 28th, 2017 in its Ramazan transmission titled, “Jeeto Pakistan” at 8.00 pm which is a violation of clause 5(p) of the Ramazan guidelines.”

The media watchdog has also asked the CEO of ARY Network to appear in person for a hearing on the 2nd of June 2017 and to file a reply by the same date. PEMRA has also previously mentioned the game shows will later be banned throughout the last 10 days of Ramazan to observe the auspicious days of the holy month.