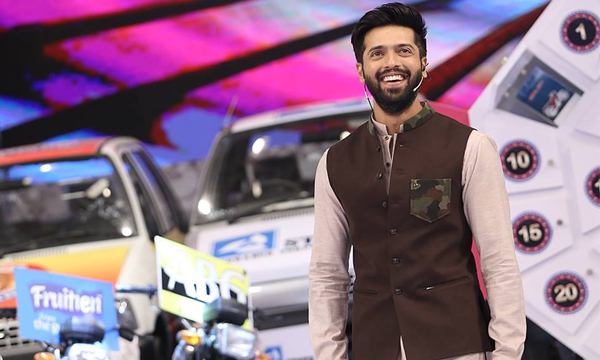 Seemingly in Ramadan Transmission 2017, Jeeto Pakistan has the whole nation going crazy after the game show. The dapper Fahad Mustafa  has proved over the time that he rocks as an entertainer. So much so, he has always given a tough time to Aamir Liaquat who started his hosting career way before him.

There is always a tug of war going on between the duo. The boys have to ensure they get the most ratings for their channels and even reap the most fan-following!

But yesterday, Fahad Mustafa did something seriously shocking! Despite all the animosity, he stopped in the middle of the game show and sent out his love to Aamir Liaquat! First, he made everybody applaud for Liaquat and declared it live on Jeeto Pakistan that

I Love You Aamir Bhai See What Fahad Mustafa… by lionking0335

He ended his love note by saying

Fahad Mustafa’s gutsy message really made us laugh! He surely is one cool host and we will never stop loving him. He is the youngest game show anchor to ever challenge Aamir Liaquat, that too with such class!