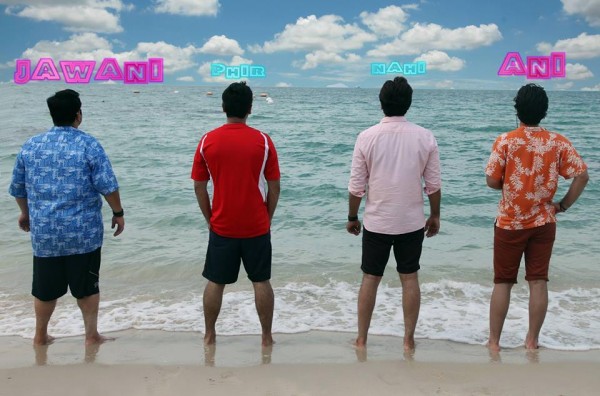 After Wrong No., ARY Films has rolled out the official trailer of its upcoming entertainer Jawani Phir Nahi Ani, slated to hit the cinemas of the nation next month.

Taking off from the streets of Karachi to the clubs of Thailand and landing for the “Wedding of the Year” in the Thai capital, the trailer of the movie promises a fun and frolic flick, packed with adventure and comedy.

Watch the trailer of the Jawani Phir Nahi Ani here.

Mehwish Hayat will return on the big screen- this time in a lead role- after her “Billi” item number in Na Maloom Afraad. Meanwhile, we will be seeing Sohai Ali Abroo grooving to killer moves, yet again, to the dance tune “Husan Ka Tadka”. Bushra Ansari has donned a different look in the movie with her striking golden spikes.

The tale revolves around the life and marriage of four friends, who are all set to party hard in the foreign lands, far away from the tyranny of their Hitler wives.

The rom-com will be releasing under the umbrella of Saeed’s home production, Six Sigma Plus. It has been penned by Vasay Chaudhry and is  a directorial debut of Nadeem Baig.

Throughout the year, ARY Films has smartly selected the dates of its movie releases with Wrong No.  releasing on Eid-ul-Fitr and Shah on Independence Day. Jawani Phir Nahi Ani will raise the curtains of cinemas countrywide on  Eid-ul-Azha and will be up against the rival Ho Mann Jahaan.