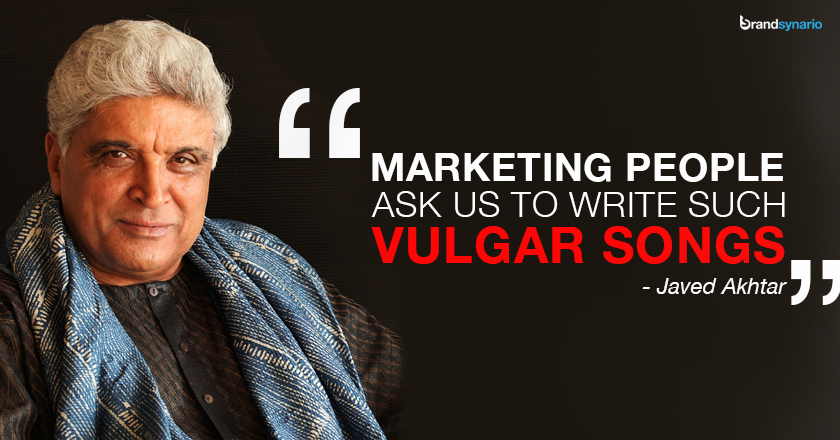 Advertising has been blamed for myriad of things and here is another one.

“Today, a song is not heard but seen, due to aggressive marketing and visuals,” he said

“Audience and aggressive marketing makes the song a hit. Marketing people ask us to write such songs, which are liked by people but if you reject such songs, it will push them to make good songs,” he further added.

Not only that, he also bashed Indian movie songs, claiming them to be offensive and compared them to much appraised Pakistani songs.

While talking about how Indian songs have changed in the past decades from being timeless to being cheap, the lyricist made his thoughts public in the Jaipur Literature Festival.

“Words are the character of a song and ultimately that remains. Only those songs survive which are well written. Earlier, a common man used to get philosophy of life from music and songs. Songs had sensibility…had elements of social justice and human values but that has vanished now and it is very sad that no one is thinking of that.”

Moving on, he compared the industry with that of Pakistan, where he believes that traditional musical formats including the likes of ghazals are still promoted and well appreciated.

Having said that he went on to say how songs in India are more about visuals than lyrics. The rising trend of item songs is offensive and killing the much talented industry of India.

He blamed the marketing sector for making them write such songs and promoting them and urged everyone to refuse to being forced to write such material.

He quoted the popular song “Choli Ke Pichay” item song from a 1993 Bollywood movie as one of the examples of a vulgar song, which if he was asked to write, he would absolutely refuse to.

Javed Akhtar went on to appreciate the talent in India and believes that a revolution through the younger generation might be on way.