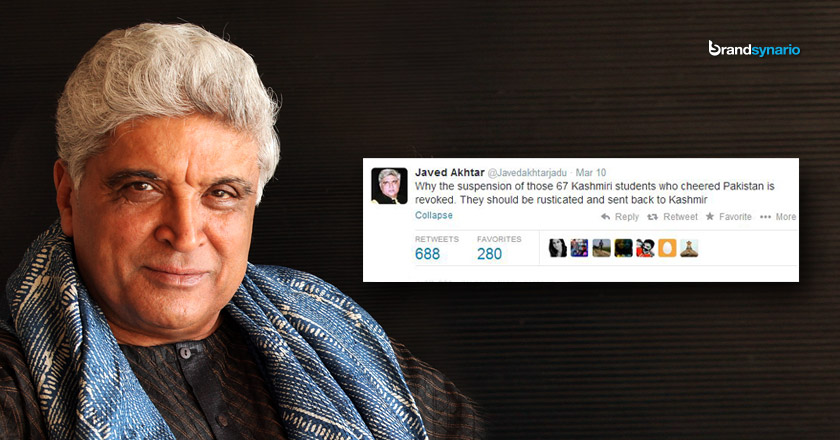 Kashmiri students, who celebrated Pakistan’s victory over India in the Asia cup, are traitors to the Indian soul and should be sent back to Kashmir.

These are the words of world-renowned Indian lyricist Javed Akhtar, and not some ignorant, unschooled, illiterate extremist group – however it may be difficult to differentiate Mr. Akhtar from them, at least after this statement.

It all started with this tweet from the legendary lyricist,

Why the suspension of those 67 Kashmiri students who cheered Pakistan is revoked. They should be rusticated and sent back to Kashmir

Not long ago, 67 Kashmiri students were suspended from Sharda University in Uttar Pradesh for celebrating Pakistan’s victory over India in a cricket match on March 1. The proceedings of the match conspired in a way that it went down the wire till the last over, a nerve wrecking game that ended with Afridi hitting two consecutive sixes to win the game for his country.

The history these two countries have shared together, emotions were bound to run high, especially when a certain country had not only proclaimed itself as one of the Big Three but also banned the other country from playing in its Premiere League.

The humiliation can only be imagined, that must have followed for that country after that appalling defeat from the hands of Afridi.

On that moment, in light of all of these facts, one can understand the happiness of some Kashmiri students in India backing their favorite cricket team, or apparently not, as Indian officials inexplicably suspended those students giving the excuse that they were celebrating Indian defeat.

Thus, Javed Akhtar’s reprehensible statement about the Kashmiri students can be neglected as a sad attempt to make himself feel better.

@Asgarnisar shame on you that you are standing by those who were celebrating Indian team’s defeat . They are traitors .

Traitors?! Really? Certain ignorance on his part is understandable since Javed Akhtar is a self-proclaimed atheist but calling those students traitors because they expressed happiness over a team’s win in a match!!A cricket match! Whatever happened to Freedom of speech? Whatever happened to common sense?

Reportedly, the University had revoked the suspension assuring a certain amount of security to them when they returned, thus proving that some Indian officials are capable of thinking before taking a decision or in this regard, a statement.

It’s funny how the halfwit once advocated Freedom of Speech;

I stand for the freedom of expression of all the writers of the world including Taslima Nasreen and condemn the ban of her serial.

The government of Uttar Pradesh withdrew their sedition charges against the students after human right Groups along with media highlighted this issue. Akhtar’s tweet, however, relived this matter highlighting his own idiocy, further on social media.

One thing is certain after all this, the world has seen intellectual and reasonable Indians but they are growing short day by day.