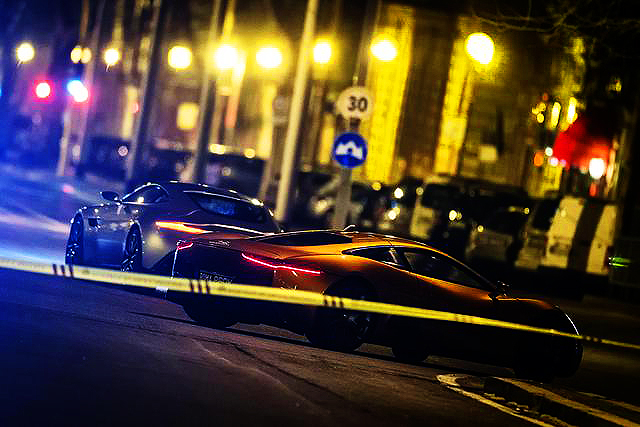 A short clip of the movie featuring behind the scenes footage of the chase sequence between the two beasts has emerged and it has got us even more excited for Spectre.

Marking the 50th anniversary of Aston Martin’s collaboration with Bond films, it will be a treat to watch the exclusive Aston Martin DB10 being driven by the iconic spy. The first Aston Martin to appear in the bond movies was the iconic gadget equipped DB5 in Goldfinger.

Jaguar has also been the star car in numerous bond films and has established itself one of the favorites of Mr. Bond. Who can forget the deadly Jaguar XKR convertible in Die Another Day armed with a gatling gun and rockets?

“I love the idea of this fantastic car being in a one-on-one battle with another incredible car from Jaguar, which is similarly extraordinary,” Sam Mendes, Director of Spectre said about the chase scene. “It’s a cat and mouse game through the night-time streets of Rome at great speed with two of the fastest cars in the world, neither of which you’ve ever seen before.”

So why does he say that? Well, unfortunately, these cars are exclusive to Spectre and won’t be produced or sold to the public as reports suggest.

The Aston Martin DB10 has been designed and produced exclusively for the Bond film at the request of Sam Mendes. Only 10 of these handmade beautiful beasts have been created, for the sole purpose of using them in the film.

Mendes said: “We have worked together to design this new car. It’s a thing of beauty – and you’ll be able to see what it can do.”

Well, the clips have just revealed on gadget till now and that’s a rear end flamethrower that will be seen used against the jaguar in the chase sequence. The DB10’s technology is being kept under tight wraps because of the competitors even on set and nothing has been revealed.

But don’t be disappointed, as Aston Martin is coming up with the DB11 to replace the spectacular DB9 early next year and it is strongly hinted that it will incorporate elements from DB10.

Complementing the award winning ‘British Villains’ branding campaign by Jaguar last year for the Jaguar F-Type Coupe which showed iconic British Actors who have made great villains for movies, Jaguar continues its tradition to project Jaguar’s image for the Classic British Villain. Charming, powerful, domineering and confident, the ultimate baddie has been cast as the villain to the DB10.

Only six C-X75 have been developed by Jaguar in collaboration with Williams Advanced Engineering. Spectre filmmakers were involved from the beginning to hone the feel and looks of the car.

The C-X75 is a hybrid supercar first unveiled at the 2010 Paris Motor Show to rave reviews touting a turbine engine. C-X75 won the ‘Best in Show’ award by Autoweek the same year.

Ian Callum, Jaguar’s Head Designer stated: “This will be the finest looking and most innovative Jaguar ever created. Even in the world of supercars, we can still produce the most beautiful.”

“C-X75 is an exciting project for us and a clear statement of Jaguar’s intent to continue creating bold, innovative and beautiful performance cars.”

Autocar stated that sources involved with the project have claimed that the concept supercar has been modified for Spectre. C-X75’s 1.6 Liter turbocharged 778hp hybrid powertrain has been replaced by Jaguar’s supercharged V8, 5.0 Liter engine that powers up the award winning Jaguar F-Type sports car.

Everyone was excited for the production of this super-car but Jaguar announced the cancellation of the project in December 2012 due to the ongoing global economic crisis. Fortunately, numerous design elements of the C-X75 were borrowed in the design of the stunning F-Type coupe and convertible.

November 6, 2015, will see James Bond’s 24th adventure begin worldwide. Until then treat yourself to behind the scene footage of the chase as well as some thrilling pics.