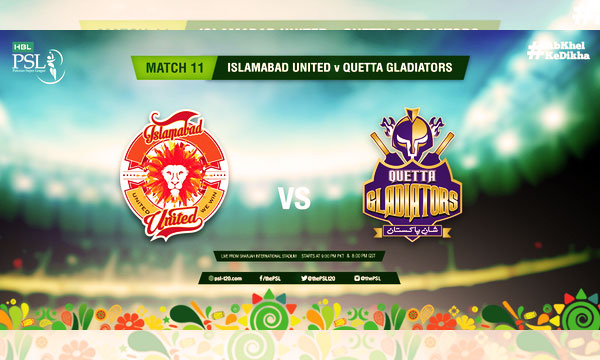 UPDATE: Quetta Gladiators has once again defeated Islamabad United quite comprehensively by 7 wickets. Islamabad United could not continue their winning momentum and a below mark performance caused another defeat to them.

The whole team of Islamabad United was bowled out for just 117 runs despite a good start. Wastson with his 40 runs was prominent and in bowling Gladiators’ Grant Elliot took three wickets in his first match of the league. The 118 was chased down by Quetta Gladiators without any difficulty. Captain Sarfraz led his side to the victory with 51 runs not out innings

Grant Elliot got man of the match award.

PSL T20 2016 heads to an exciting match between Islamabad United and topper of the points table, Quetta Gladiators. Gladiators’ Captain Sarfraz has won the toss and chose to bowl first; this is the second game between these two sides after the opening match of the league which Quetta won easily by 8 wickets.

Aizaz Cheema has been brought in for Umar Gul #QuettaGladiators #ShanePakistan

Islamabad United’s opening pair has started clicking at the right time and the team is shaping into a dangerous side. Last night we all saw the splendid show of sixes by Sharjeel Khan and Shane Watson and they can make the things difficult for Gladiators’ bowlers once again.

Gladiators must have been confident of their previous performance but now Islamabad United has a totally different body language, so they have to be careful and give their 100 percent on the field.

Here is one of @grantelliottnz's three wickets in a fabulous effort. No jet lag for him! pic.twitter.com/Um8ca7Pqaq