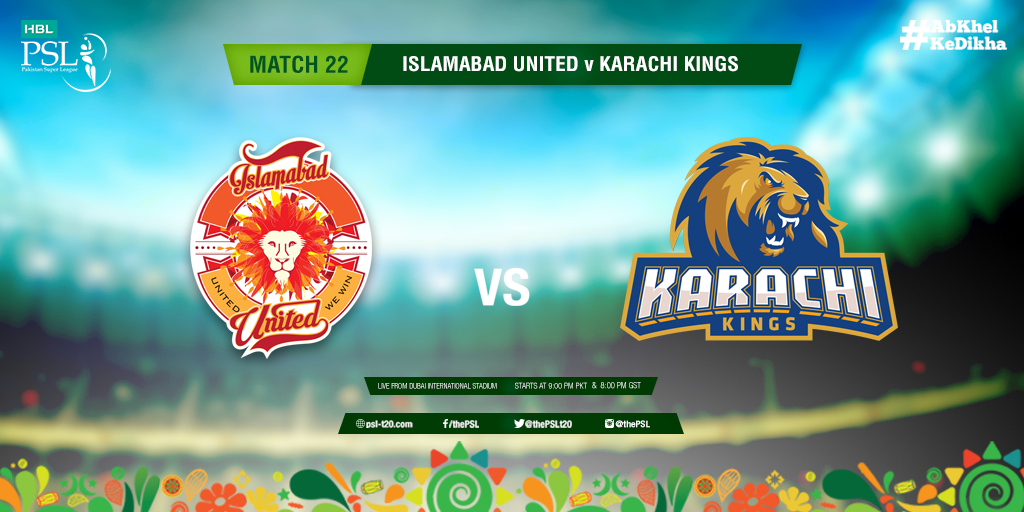 UPDATE: Islamabad United has knocked out Karachi Kings in 2nd playoff of HBL PSL T20 2016 comfortably by 9 wickets. Karachi Kings was put into bat by Misbah ul Haq after he won the toss, and showed poor display of batting just added 111-9 on the board in their 20 overs. What a brilliant spell bowled by Mohammad Sami who took a five wicket haul giving away just 8 runs in his four overs.

The Eliminator was totally one sided in the end when Islamabad United chased down the small total on the loss of just one wicket. Bran Haddin scored 52 runs off 29 balls and finished the match with five overs to spare. Mohammad Sami was declared man of the match for his outstanding bowling figures (4-0-8-5).

THE REAL KING OF KARACHI!

The second playoff of PSL T20, the eliminator, is battle of survival between Islamabad United and Karachi Kings. The match will commence shortly in Dubai International Cricket Stadium. The losing side of this match will have to go home, all the way back to Pakistan.

Critics and analysts are predicting that Karachi Kings’ campaign of PSL just might end today. Just a few hours before the second play off, Shoaib Malik has stepped down from captaincy of Karachi Kings  – which may end up hurting Karachi’s camp. Ravi Bopara has taken the charge in place of Shoaib Malik, who wants to focus on this game properly, without the pressure of captaincy.

Good luck to @KarachiKingsARY today. Excited to captain the side for the 1st time but @realshoaibmalik will always be kk true leader🏏

Both these sides have managed to secure a spot in the quarter final, after struggling in the event with their consistency, but for the last couple of matches, Islamabad United has shown a lot of improvement in their game, while Karachi Kings qualified for this stage after ifs and buts, so they will be under pressure in this crunch game and now being led by the new skipper.

The team which will win the toss, would go for batting second due to the dew factor that have been  is troubling bowlers in the previous matches. However, again a massive crowd is expected to see the live action, it was houseful yesterday in Zalmi’s match (1st Playoff) and almost same number of spectators likely to come today to see the live action.

Misbah and company have an edge over Kings, as Islamabad United has 100 percent wining record in the two games of PSL they played against Karachi and they can keep this winning spree in third game too.

No big changes are expected to come in both sides and specially the man in form, Karachi’s captain Ravi Bopara will be prime for their hopes and also opponents will focus to get rid off him early.