Home Articles Is Social Media turning you into a Narcissist?
Advertisement 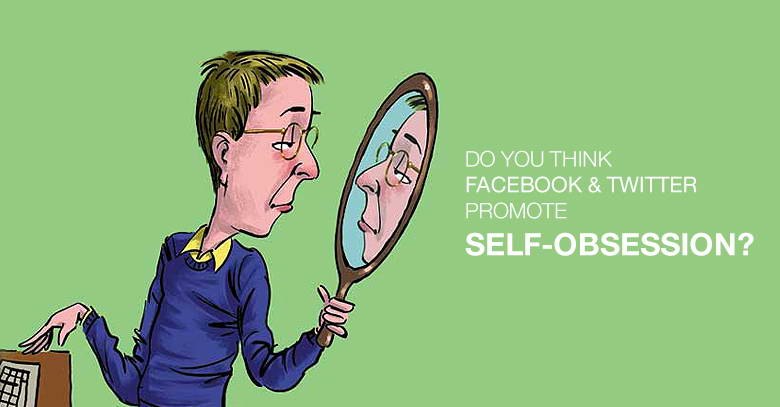 By Zulfiqar Ali Sajwani
Every one of us in our entire lifetime, must have stood in front of a mirror and said, “ Hey you out there, you are a good person mate”.

There is nothing wrong with it. After all, we all deserve appreciation and recognition. However, too much of anything can definitely be hazardous. Boasting about yourself every moment can definitely turn you into a ‘Narcissist’.

As the times have changed, the Snow White’s mother has found a ‘new mirror’ which tells her how beautiful she is. This time, it is a far more interactive and diversified mirror (medium). By now you must have guessed it. Yes. Social media is the new tool that fosters narcissism!

Social Media: A driver for Narcissism?

From the time the wave of Social Media took over the communication arena, we saw every age group, from children to adults, addicted to this platform.

From the time the wave of Social Media took over the communication arena, we saw every age group, from children to adults, addicted to this platform.

People may forget to meet their beloved or might even skip a meal, but checking their news feeds is something that they simply cannot afford to do.

Many researchers have attempted to delve why the social media platforms enjoy such popularity.

The recent study of University of Michigan titled ‘Computers of Human Behavior’ reveals that Facebook and Twitter are the drivers towards Narcissism.

Researchers Elliot Panek, Yioryos Nardis and Sara Konrath, attempted to explore the construct that social media reflects and amplifies growing levels of narcissism within the US culture. After conducting two separate surveys of 486 college students and 93 adults, the researchers concluded that Facebook is a mirror and Twitter is a megaphone for the cultural obsession with ‘self.

“It’s about curating your own image, how you are seen, and also checking on how others respond to this image,” Panek said highlighting the reason why we can associate the social media platforms with self love.

The research revealed that among young adult college students, those who scored higher in certain types of narcissism posted more often on Twitter, whereas among middle-aged adults from the general population, narcissists posted more frequent status updates on Facebook.

That certifies that not only college students, but middle-aged gentlemen and women are also indulging in the pleasant feeling of being on the top of the world via Facebook.

After hearing out the empirical facts about how Facebook and Twitter are facilitating the move towards Narcissism, let’s just explore those activities that we carry out on social media that support the researchers claim.

There is a reason why this term found its place in the Oxford Online Dictionary. Every day our news feeds are flooded with images of people looking into the camera and holding it at the same time.

Be it a new haircut or a new apparel, we love to become the models for our own accessories and post it on Facebook!

Whereas the true essence of this feature is to exhibit whatever you believe in, most of us love sharing news and views that would achieve us exhibitionism and acclaim.

This feature allows you to perceive yourself in whatever image you wish to. Share a controversy and see yourself as a radical person! Share the ‘happiness is…’ posts and transform into a calm and composed human being.

We have come across people who have not reached the latest hyped destination yet and have already ‘checked in’ with their friends while sitting in the car. This feature helps us satisfy various traits of narcissism including superiority and exhibitionism.

We expect the entire world to get ‘jealous’ for we have achieved a milestone by becoming the first person to hit the ‘hot spot’.

The recent wave of Social Media games gives us a great sense of entitlement when we clear a level. The fact that you beat a friend in Candy Crush gives us a sense of vanity and self sufficiency. We believe that we have the power to beat all odds, though in reality, it is just a virtual reality scenario where we have been triumphed.

IS BEING NARCISSISTIC SO BAD?
There is no harm in thinking highly of ourselves. It gives us motivation and passion. But an overdose of anything is dangerous.

However, being narcissistic can seriously affect our relationships with our loved ones. Nobody wishes to become the beautiful peacock with a bad voice. So next time when we log on to our social media platform, lets observe where do we stand in the reflection of the social media turning us into a narcissist.