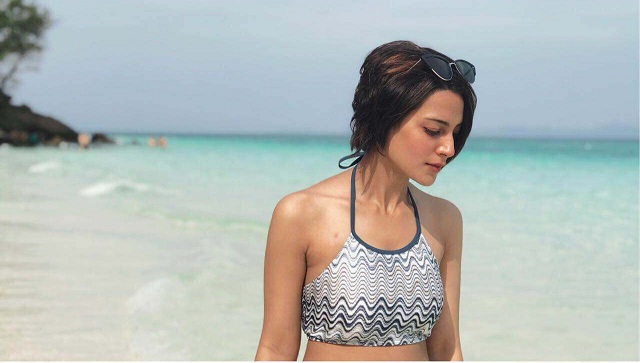 Known as the “queen of expressions” among her fans and followers, the new generation sensation Iqra Aziz has not only taken our breath away with her flaunting looks and charming personality but has also marked her place in the industry with her impeccable acting skills and talent!

With many dramas in her bucket, Iqra has been a part of some successful projects including Qurban, Tabeer, Mol, Choti Si Zindagi and the latest hit, Suno Chanda in which her character, “Ajiya Nazakat Ali”, has received tremendous love from the viewers!

I heard a definition once: Happiness is health and a short memory! I wish I'd invented it, because it is very true- Audrey Hepburn #audreyhepburn #happiness #smile

Iqra started her career as an actor at the of 13 and since then, there’s no going back! The 24 years old actress has come a long way and with her hard work and efforts, she has earned her place!

If we talk about looks, this gorgeous young diva has certainly groomed herself over the years and her transformation throughout her career is worth all the appreciation!

Back then, when she appeared as a school girl in a commercial!

Probably from one of her initial shoots when she had thinner eyebrows!

Her look from the drama “Mol” in which she starred alongside Faysal Qureshi!

And when she decided to have short hair!

Her look in another TVC!

Iqra’s look in “Qurban”, the drama that certainly took her career to new heights!

After she gained prominence in the industry, Iqra put all the efforts in her work and her transformation into a stunning lady speaks for itself!

She knows how to slay in every look!

Jiya, the girl we all fell in love with!

Iqra has given us some major goals by the way she has transformed her personality over the years. From a cute girl to a classy lady, Iqra looks stunning in every look and with her confident personality, this young diva will surely go places in the future!