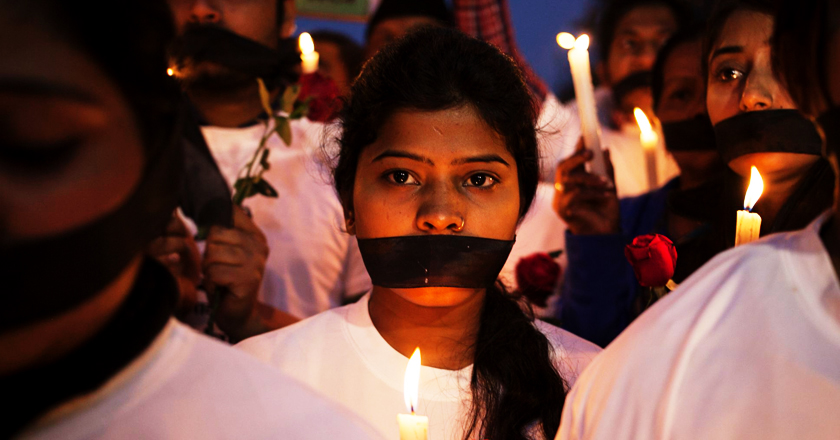 The controversial documentary, India’s Daughter, based on the brutal real life incident, the 2012 Delhi gang rape of 23 year old Indian student, Nirbhaya, in South Delhi, premiered in US yesterday at a star studded event, led by iconic star Meryl Streep.

The documentary depicts the actual incident based on the stories provided by the witnesses and relatives and views by social activists and the victim’s family. What has made the documentary controversial in India is the exclusive interview of one of the convicts, Mukesh Singh.

The convict, sentenced to death penalty along with three others, was quoted saying, “A girl is far more responsible for rape than a boy is for rape. A decent girl won’t roam around at 9 o’clock at night. … Housework and housekeeping is for girls, not roaming in discos and bars at night doing wrong things, wearing wrong clothes.”

The convict is the same man who appeared smiling at his hearing in the court back when he was sentenced, showing that he did not feel remorse then and doesn’t feels it now. The news of the inclusion of his interview in the documentary created outrage last week in India, resulting in the ban of the documentary.

While the documentary was aired at BBC on 4th March and subsequently uploaded at YouTube for everyone to see, the Indian government requested YouTube to take it down.

The outrage in India is centered around the fact that the interview shows Indian men and a certain class of society as potential rapists, who can not only commit heinous crimes but justify their acts by blaming it on women for their actions.

Cases have been filed against the makers of documentary for intentional insult, defamation and sending offensive messages and creating fear and alarm.

While the intention of filmmakers might just be to highlight the mindset of criminals, the Indians worrying about insult are the least of their problems.

As with all other shows broadcasted on screens, entertainment or otherwise, the documentary glorifies the criminals.

To a rational person, the interview might just horrify them but for those who are already thinking like this, the interview is like an encouragement to emulate. There have been reports in India where men have seen the interview and have been impressed enough to say it out loud.

Bollywood Reacts on the Ban on Documentary in India

On the other hand, many Indian celebrities and the international audience are against the ban of the documentary.

As pointed out by renowned lyricist, Jawed Akhtar, the interview should be seen as a reflection in the mirror for those who think women should be blamed for being independent and living their life. “It’s good that this documentary has been made. Crores of men in India have now come to know that they think like a rapist. If it is sounding dirty, they have to think.”

Moreover, these convicts are not the only ones who think like that. Previously, there have been statements from Indian female social activists too who blame women for asking for trouble.

This shows what the documentary intended the world to see: the criminals are not monsters or freaks of nature necessarily, they are common people taught the wrong values and beliefs in life. What Mukesh Singh said is nothing new if compared to what many extreme religious leaders and orthodox members of the society regularly say.

The documentary highlighted the confidence of the victim, her outright refusal to accept the society’s conformities, but as with all women globally, she learned the reality, the helplessness of women, the hard way.

I humbly appeal to the concerned ministry that they lift the ban on this film. It’s only effect is that of introspection. #IndiasDaughter

Just watched #IndiasDaughter & it should be mandatory viewing for everyone- It highlights a mindset v all need 2 fight! #rape

Every women’s inalienable right is Respect. How can we save our India’s daughters by banning #IndiasDaughter ????anyone??

“Millions of men will realise that they think like a rapist” #IndiasDaughter pic.twitter.com/5lcRGyFSg0

If anything #indiasdaughter shud be made compulsory in schools. a mirror to society to educate the young

Such horrific cases of gang rape are common now not only in India but across the world. The director of the documentary, Leslee Udwin, herself is a victim of the horrible crime.

However, in such times, where there is a need to draw the attention of people and make them realize the mindset of others around them, there is also a dire need to see the fine line between retelling a story to create awareness and glorifying the details to create unacceptable role models.

Do you agree with the author? Tell us in the comments below.