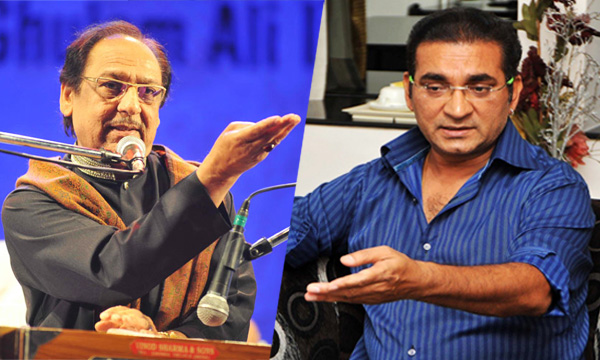 The famous Pakistani Ghazal singer Ghulam Ali has been accused by ‘Abhijeet Bhattacharya’, an Indian singer, as being a dengue artist and belonging to a terrorist country. Previously, Ghulam Ali was threatened by a Hindu political party ‘Shiv Sena’ right before his gig in Pune and Mumbai. Shiv Sena forced the organizers of the show to cancel the show or declared to protest ‘in his own style’ if they continue with the concert.

See his tweets below:

Some of the famous faces of B-town like Shabana Azmi and Mahesh Bhatt condemned the step taken by Shiv Sena but Bhattacharaya believes otherwise.

Moreover, Bhattacharya has always been too vocal and insensitive about his thoughts. He expressed his not-so-welcomed opinions in Salman Khan’s hit-and-run case as well stating that roads are not for sleeping and only dogs sleep on the roads. He also said that those who sleep on the roads die like a dog.

We think Abhijeet Bhattacharaya’s opinion is totally unrequited and un-asked for! What do you think? Let us know.