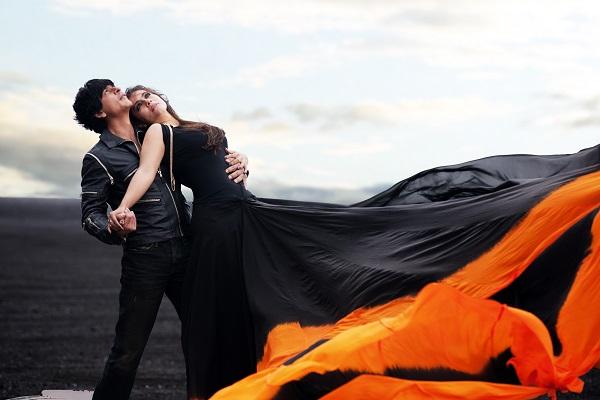 HUM Films has retained the rights to officially distribute the much-anticipated movie of the year Dilwale in Pakistan.Bollywood’s biggest production of the year, Dilwale has already created the much-needed buzz and is hitting headlines for all the right reasons as it will mark the comeback of the iconic and audiences’ favourite on-screen couple Shahrukh Khan and Kajol after years.

The movie is all set to hit screens on December 18, 2015 and will be released in Pakistan the same day under the banner of HUM Films and HUM as its exclusive media partner. The movie trailer has already captivated the audiences on both sides of the border and recently Red Chillies Entertainments Pvt Ltd and Rohit Shetty Productions presented the love anthem of Dilwale ‘Gerua’ at a gala event at Maratha Mandir in Mumbai. Kajol and Shah Rukh Khan were also present at the do along with Varun Dhawan and Kriti Sanon.

Gerua is featured on the iconic couple of Kajol-SRK in the film and has been sung by Arijit Singh and Antara Mitra. The lyrics have been penned by Amitabh Bhattacharya.

Shah Rukh Khan said “Since Kajol and I are coming back together on-screen after years, Rohit felt that we should try and make Gerua stand out better than all the other songs we have done earlier. We have done many beautiful songs and are really fortunate to have done those. But Rohit was very clear and precise about how he would like to shoot this one. He paid attention to every detail starting from the choice of location, costumes and every other technicality because it was essential to him.”

Speaking on how different Gerua would be from their earlier tracks, he further added, “It’s all about the old world charm of Kajol and I but presented in a manner that is very much like Rohit Shetty. Shooting for the song was extremely difficult. It was cold and we could barely walk but Rohit made everything easy. He has made so many efforts which would possibly never be known except in the making video. When you have such a director who is always eager to help, the actors feel much at ease and eventually the song also turns out fabulous.” Kajol said, “We shot the song in a start to finish schedule of 7 days. We worked really hard and it was severe cold but had a great time in all as the song itself is so good that we enjoyed performing. I am sure the audiences will also find it magical once they see it on-screen”.

Directed by Rohit Shetty, Dilwale is a family entertainer with a perfect blend of action, romance and comedy. Produced by Red Chillies Entertainments in association with Rohit Shetty Productions Dilwale boasts a star cast including the iconic Shahrukh Khan, Kajol, Varun Dhawan and Kriti Sanon in lead roles.