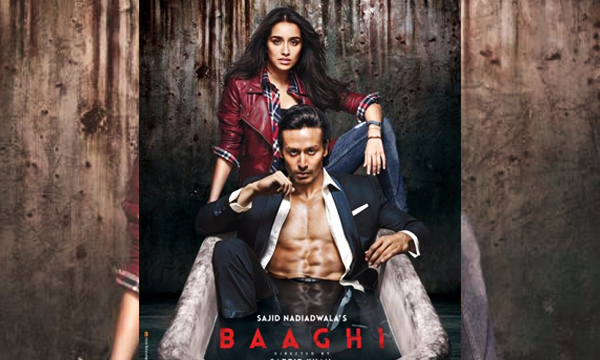 Posing behind tiger in a leather jacket, Shraddha breaks her stereotypical avatar and looks absolutely sultry. The film is all set to release on April 29th, with high octane action scenes in the movie. What do you think of the new poster?

The first look of Baaghi, ‘Rebels in Love!’ has been tweeted by the lead cast, namely Shraddha Kapoor and Tiger Shroff.

Shraddha Kapoor first tweeted a poster with the hashtag #BeARebel, calling Tiger Shroff her favorite rebel and wishing him a Happy Birthday. She also posted the first look of Baaghi, showing Tiger in an intense avatar.

Have a look at the official trailer:

Have a look at the poster here:

Directed by Shabbir Khan, the film Baaghi stars Shraddha Kapoor, Tiger Shroff and Telugu actor Sudheer Babu as lead actors. Sudheer will be seen playing the role of an antagonist, one who is against Shraddha Kapoor and Tiger Shroff’s love.

The romantic drama film is a remake of the Telugu movie Varsham that featured the actor Prabhas in the lead. The movie is slated to hit the screens this April.

There is much more to be revealed about the movie so stay tuned to Barndsynario for more updates!