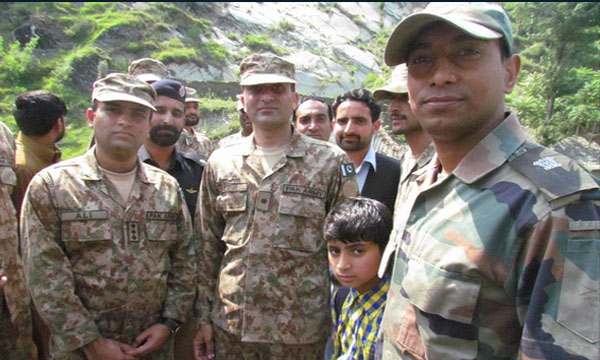 The Indian army handed over a young Pakistani Kashmir lad who accidentally crossed the Line of Control and walked into the Indian terrain.

A dweller of Laswa area of Athmuqam, the eleven year old Sameer Kiyani was intercepted by the Indian rangers, who realized that the boy has crossed the border by mistake.

Immediately, the army members in India contacted the Pakistani army via a hotline message, assuring that the boy will reach his abode at the earliest.

After an urgent flag meeting held at Teetwal, the Indian army  handed over the young chap to the green authorities by the unit based at Tanghdar frontier area.

But what’s heartwarming is Kiyani was gifted a pair of new clothes and basket of sweets for his family while returning to Pakistan side of Kashmir.

Upon handling over the innocent child, the members of Pakistan and Indian army posed for a candid photo together with Sameer.

While previously a pigeon was arrested and jailed in India for being suspected as a Pakistani spy, this affable act of the Indian army toward the innocent child had strike a deep chord in the hearts of many.

What do you think of Indian’s army act of returning the Pakistani child with gifts to his family?