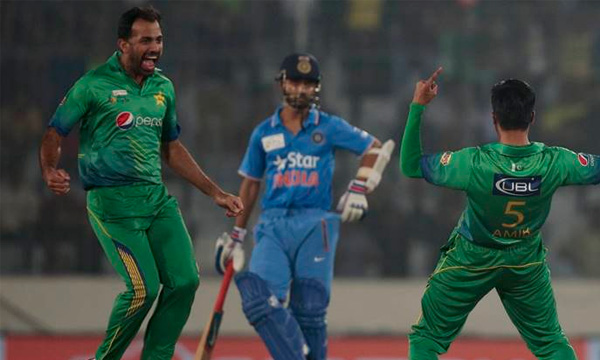 Sunil Gavaskar, a veteran former Indian cricketer, has chosen Pakistan as the favourite team against India in the much-awaited match of the World T20 2016 to be held at Eden Gardens Kolkata on Saturday, 19th March.

India, the overpowering favorites to win the T20 title at the start of the grand event, faced defeat at the hands of New Zealand in the opener; on the other hand, Pakistan thrashed Bangladesh in their opener.

“After the loss to New Zealand, India will be under far more pressure against Pakistan. I feel Pakistan start as favorites for the game on Saturday,” says Sunil Gavaskar said while speaking to NDTV. Sunil Gavaskar predicts that the much-hyped clash between the champions will be all about Pakistan’s bowling vs Indian batting.

“It is still pretty much Indian batting versus Pakistan bowling. However, with the way Indian bowlers have performed recently, they also won’t be easy to tackle either. Ashwin (Ravichandran) is bowling well and so is Nehra (Ashish), ever since he has made a comeback. Then you have Jasprit Bumrah. So it will be a test for Pakistani batsman”

“Having said that, it only takes an over and a half to turn the game around in T20,” said the former India captain.

Left-arm, fast pacer Mohammad Amir gave Indi a difficult time in the Asia Cup 2016; Gavaskar truly hopes that the Indian batsmen have finally learnt and planned how to face Amir early on.

“Hopefully Rohit (Sharma) and others know that unlike many other left arm pacers, Amir has the ability to swing the ball back. Rohit and Rahane were found wanting against him in Asia Cup. So they have to careful for the first couple of overs and once you are set, there is always an opportunity to score,” Gavaskar added.

India has never lost a world event to Pakistan while Pakistan did not lose a match to the rivals at the landmark, Eden Gardens.