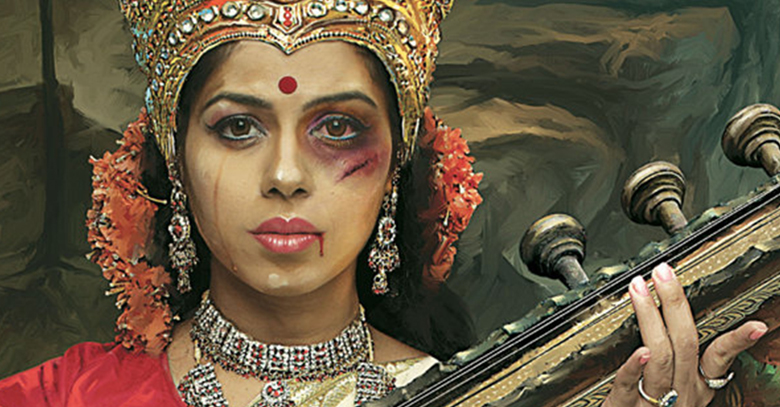 Violence against women is a technical term used globally as an act of gender-based coercion that results in, or is likely to result in, physical, sexual or mental harm or suffering to women. Acid throwing, rape, marital domestic violence, honor killing, forced prostitution and other hideous crimes sum up to be the major portion to define ‘violence against women’. This further includes threats, coercion or arbitrary deprivation of liberty.

The award-winning ad campaign was commissioned by Save the Children India for its Save Our Sisters initiative.

India is predominantly a Hindu country and in Hindu mythology God is perceived to have had many feminine avatars. These Goddesses, the depictions of God in different time eras, are called ‘Maa’, literal translations of which is ‘Mother’. Ironically India also has a blood-stained history of violence against women.

It is these burning facts that make the art-work, by Taproot India, so sorrowfully captivating. The shocking illustration – of how their gender is being treated nowadays – of three of the most valiant Goddesses of Hindu Mythology highlights the basic reality of violence against women.

A powerful ad campaign, “Every woman is a Mother”, showing beaten and bruised Hindu goddesses serves as a stark reminder of the violence against women that plagues India.

The print campaign includes a body copy that reads,

“Pray that we never see this day. Today, more than 68% of women in India are victims of domestic violence. Tomorrow, it seems like no woman shall be spared. Not even the ones we pray to.”

The trio of goddesses includes Mother Lakshmi – the goddess of wealth and beauty, Mother Saraswati – The Goddess of Music, knowledge, Art and Science and Mother Durga – The Goddess who symbolizes good triumphing over evil. The images show these Goddesses with bloody lips, black eyes and cuts on their beautiful faces.