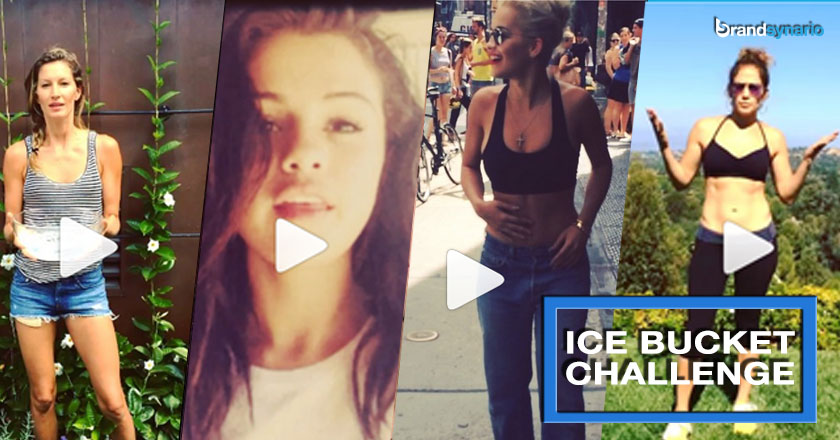 It’s quite chilly down there in Hollywood with its celebs fearlessly chucking down buckets full of freezing water over themselves for the Ice Bucket Charity Challenge – an awareness campaign for amyotrophic lateral sclerosis or ALS.

The campaign that kick started in July has gripped the world in a wild frenzy, daring everyone to donate $100 in charity or douse oneself with ice-water and further tagging three other people to accept the challenge.

Social media is alight with videos of people pouring pails of ice-cold water to raise money for ALS and now even a score of superstars have jumped into the frosty bandwagon.

From Oprah Winfrey to David Beckham, Bill Gates to Justin Beiber, Mark Zuckerberg to Britney Spears, almost everyone, and we mean everyone has joined the bucket brigade and got soaking wet. The list just keeps growing every other hour.

1. JLO was all prepared until the water hit her right in the face!

2. Taylor Swift and Jamie King gathered a hoard of people to participate in the ice-soaking video and even contributed $100 for every single person involved.

3. Following Taylor is her best bud Selena who too, valiantly took up the challenge and drenched herself wet on her Instagram account.

4. Even the cast of Grey’s Anatomy could not resist taking up the icy-challenge. Watch the video here.

5. Dressed in her trademark “gaga” style and carrying an enormous steel container, Gaga quite robotically soaked herself wet for the cause.

7. Lionel Messi was all smile while splashing himself with stone cole water

8. Justin Beiber seemed pretty enthusiastic about showing up his torso in the video and took up the challenge twice, nominating his fandom of “Beliebers” to follow suit.

Till date, the viral ALS Ice Bucket Challenge has managed to raise a whopping $22.9 million in the name of the deadly disease. Victims of ALS lose all abilities of muscle control, speaking and even breathing causing instant death.