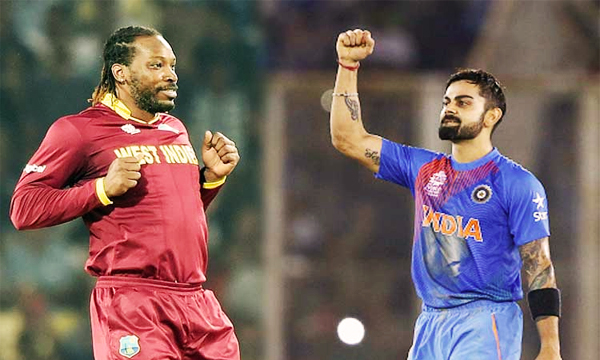 UPDATE: The West Indies clinched their place in the final of the World Twenty20 on Thursday with a stunning seven-wicket victory over the hosts India at Mumbai’s Wankhede stadium.

Lendl Simmons top-scored with an unbeaten 82 as the West Indies reached their target of 193 with two balls remaining.

They will now play England on Sunday in the final at Kolkata’s Eden Gardens, with both teams bidding to become the first sides to win the tournament twice.

Virat Kohli top-scored with 89 as India made a respectable total of 192 for two against West Indies in the second semi-final of cricket’s World Twenty20 on Thursday.

India’s talisman hit 11 fours and one six as he injected much-needed life into the hosts’ innings after West Indies won the toss and elected to field at Mumbai’s Wankhede Stadium.

Kohli, in at number three, started nervously though and the Windies were left to rue a bizarre moment in the ninth over when they should have run the 27-year-old out.

After missing a free hit, Kohli, on one, inexplicably began running for a single, only to be waved back by Ajinkya Rahane.

Both wicketkeeper Denesh Ramdin and bowler Dwayne Bravo then missed the stumps from just a few yards out, handing Kohli an unlikely reprieve for his moment of madness.

India’s hottest prospect breathed a huge sigh of relief and quickly began putting runs on the board after a slow start from openers Rohit Sharma and Rahane.

The ground is known to be a batsman’s paradise but boundaries were few and far between in the opening stages as India picked up singles with some quick running between the wickets.

Sharma hit three fours and three sixes in his 31-ball 43 while Rahane took 35 deliveries to reach 40, scoring only two fours and no sixes.

Kohli, who entered the fray in the eighth over after Sharma was bowled lbw by Samuel Badree, upped the tempo, to the delight of a packed crowd at the 33,000-seater stadium.

India were at 86 for one at the halfway stage and it wasn’t until the 13th over that they reached 100.

The victors will take on England in Sunday’s final at Eden Gardens in Kolkata after Eoin Morgan’s side defeated New Zealand in the first last-four match.

West Indies won the toss and elected to field against India in the second semi-final of cricket‘s World Twenty20 at Mumbai’s Wankhede Stadium on Thursday.

Big-hitting opener Chris Gayle returned for the West Indies after sitting out their dead rubber defeat to Afghanistan, with Evin Lewis making way.

Lendl Simmons also came in for the injured Andre Fletcher.

India also made two changes to the team that defeated Australia on Sunday, with Ajinkya Rahane and Manish Pandey replacing Shikhar Dhawan and the injured Yuvraj Singh.

The victors will take on England in Sunday’s final at Eden Gardens in Kolkata after Eoin Morgan’s side defeated New Zealand in the first last-four match.

Scoreboard from the World Twenty20 semi-final between India and West Indies at Mumbai’s Wankhede stadium on Thursday:

Chris Gayle is determined to grab the World Twenty20 limelight back from in-form Virat Kohli when the West Indies and India clash in a mouth-watering semi-final in Mumbai on Thursday.

The destructive opener smashed an unbeaten century, which included 11 sixes, in the West Indies’ opening win against England but has only batted once since, making just four.

Kohli has been the star of the tournament so far, expertly guiding India through the group stages with a half-century against Pakistan and 82 not out in a crunch win over Australia.

With the flat wicket at Mumbai’s Wankhede Stadium a dream for batsmen, the last-four showdown between the hosts and 2012 champions is set to be a battle of the big-hitters.

“I am looking to show what Chris Gayle is,” Gayle warned ominously on Tuesday.

“I have only batted twice but this (semi-final) is a perfect opportunity to actually start the tournament and try and pick up where I left off, get a big one for the team and put them in a winning position,” he added.

The 36-year-old described Kohli, who is the top run-scorer left in the tournament with 184, as a “world beater” but insisted neither he nor the West Indies was concerned about individual players.

“Chris Gayle will always be positive. It does not matter which bowler is bowling against Chris Gayle,” he said.

“No names, just cricket ball, beat it as hard as possible,” Gayle added.

India is looking to take another step on their quest to become the first team to win the World T20 twice, after their triumph in the inaugural 2007 edition, and the first on home soil.

They are also bidding to give inspirational 34-year-old captain Mahendra Singh Dhoni — who is though to be close to announcing his retirement — the chance to out on a high.

India was stunned by New Zealand in their first match but picked up three straight wins to qualify second from Group Two.

By contrast, the Windies won their opening three games to top Group One before being shocked by minnows Afghanistan.

Gayle believes India have the momentum but warned that “anything was possible”.

“India are the favourites. It is always going to be difficult to beat them here. But the West Indies are ready for an upset,” he said.

The Windies preparations were dealt a blow with the announcement that Andre Fletcher, whose unbeaten 84 fired his team to victory over Sri Lanka, had been ruled out the rest of the tournament with a hamstring injury.

Fletcher has been replaced by Lendl Simmons, who gets a second chance to take part having been originally named in the squad but having to withdraw on the eve of the tournament with a bad back.

India meanwhile are sweating on the fitness of left-handed batsman Yuvraj Singh, who picked up an ankle injury against the Aussies. Ajinkya Rahane and Manish Pandey stand ready to replace him.

“I don’t know whether we should make changes but it is possible, depending on the wicket,” Dhoni said earlier this week.