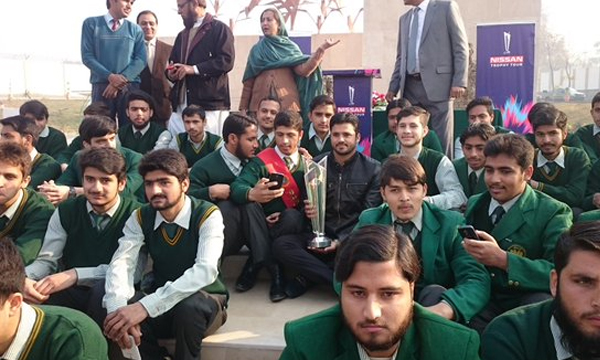 The ICC World T20 Trophy was unveiled in Pakistan today at a ceremony held at Army Public School in Peshawar, Pakistan. Commemorating the martyrs of APS attack, the trophy was unveiled by students of APS while One day captain, Azhar Ali was also present on the occasion.

The trophy, which embarked on a global journey from Mumbai will now be passed on to Bangladesh (14 &15 January) and then Sri Lanka (17 & 18 January). It will return to return to New Delhi on February 1.

It was an honor to pay tribute to APS Peshawar & home of domestic T20 champions during Nissan Trophy Tour #WT20 pic.twitter.com/mcCHjECyHX

During its journey, the trophy has been on display at domestic and international matches, as well as at various public places, which will enable the fans to capture a very special moment with the most prestigious silverware in the shortest format of the world game.

See some highlights from the ceremony here: