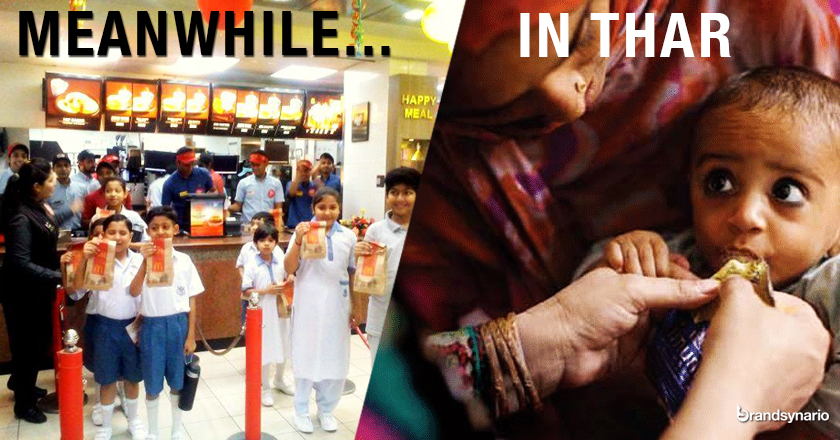 A moment of silence as McDonald’s audaciously celebrates its traditional ‘Breakfast Day’ on March 17th, giving away 1000 free Egg McMuffins when the children of Thar scream for a piece of bread and a drop of drinkable water.

It’s not just about McDonalds; it’s actually the overall indifference that can be felt in Paksitan regarding the Thar drought. It seems as if, simply put, Pakistanis don’t care anymore. It seems T20 world cup and other important affairs have consumed our attention.

Pakistanis, it seems, do not even have a second to stop in their tracks and mourn Thar catastrophe, or the people who have died miserable deaths of pain, thirst and hunger.

McDonald’s Malaysia postponed their ‘National Breakfast Day’ in the country in honor of the Malaysian airlineMH370 tragedy. The plane claimed the lives of not more than 300 people, whereas Thar has a recorded population of 955,000 people all Pakistanis.

Keeping aside the morality of matters, giving away a thousand free Egg McMuffins would have been a good promotional strategy had the country not been suffering a natural catastrophe – during which, it is a bad investment! A BIG marketing NAYY as critics would call it.