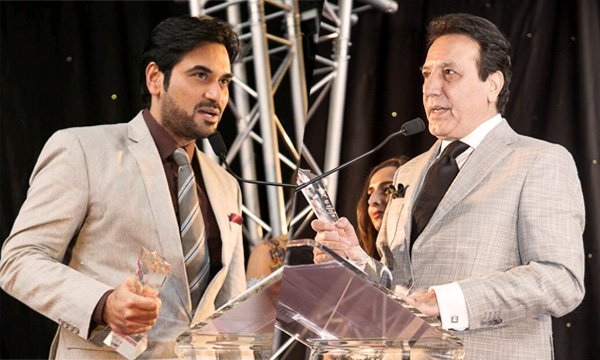 Eminent personalities of Pakistani Showbiz Industry, Humayun Saeed and Javed Sheikh were honoured by UK’s Pakistani community in a star-studded ceremony held in London on Saturday.

Javed Sheikh, who has received earnest reviews for his performance in Na Maloom Afraad and Jawani Phir Nahi Aani (JPNA), while talking to Express Tribune after the ceremony said that “I am proud to be able to represent Pakistan in a positive light. The feedback to my performance in JPNA is truly heartening.” Javed Sheikh expressed his delighting views by thanking his fans in London for their love and overwhelming support.

Along with Humayun Saeed and Javed Sheikh, Humaira Arshad also received an achievement award in recognition to her participation in the music industry. It is pertinent to know that PAA was launched in 2009 to encourage and recognise the efforts of Pakistani actors in the Britain Society. In the past, boxer Aamir Khan and actress Veena Malik has also been awarded by PAA.