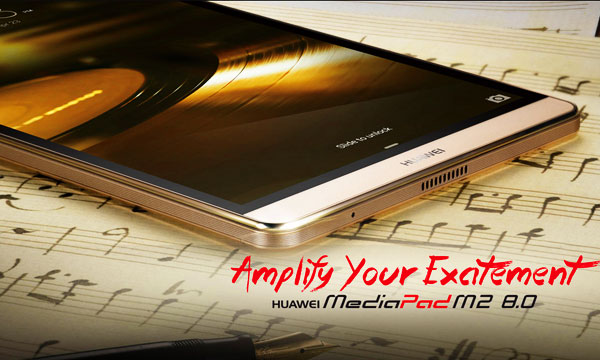 Huawei unveiled M2, an update over the Huawei MediaPad M1 slab that the company revealed last year on July 14th, 2015 in Beijing. The tablet will come in both Wi-Fi and LTE offerings.

The MediaPad tablet is an affordable All Metal 8 inch tablet with a resolution of 1920 by 1200 pixels at an aspect ratio of 16:10 and PPI of 275. Under the hood, Huawei has fitted in it an in-house Kirin 930 octa-core (4 Cortex A53 cores running at 2GHz and 4 Cortex A53 cores clocked at 1GHz) chipset, one that is paired with 3GB of RAM. This is the same CPU, GPU, RAM, and screen resolution setup as on the Huawei P8.

The design of the tablet is entirely metal-based, with the body said to comprise of 99.5% metal. It also has a thin 7.8 mm waistline and slim bezels.

The M2 comes with an 8MP primary camera and a 5MP secondary shooter. Other specs include a 4800mAh battery, optional LTE connectivity, as well as dual 1W speakers and Harman Kardon’s Clari-Fi sound technology (an intelligent audio refiner). On the software side, the Huawei M2 runs EMUI 3.0, Huawei’s proprietary implementation of Android 5.0 Lollipop.