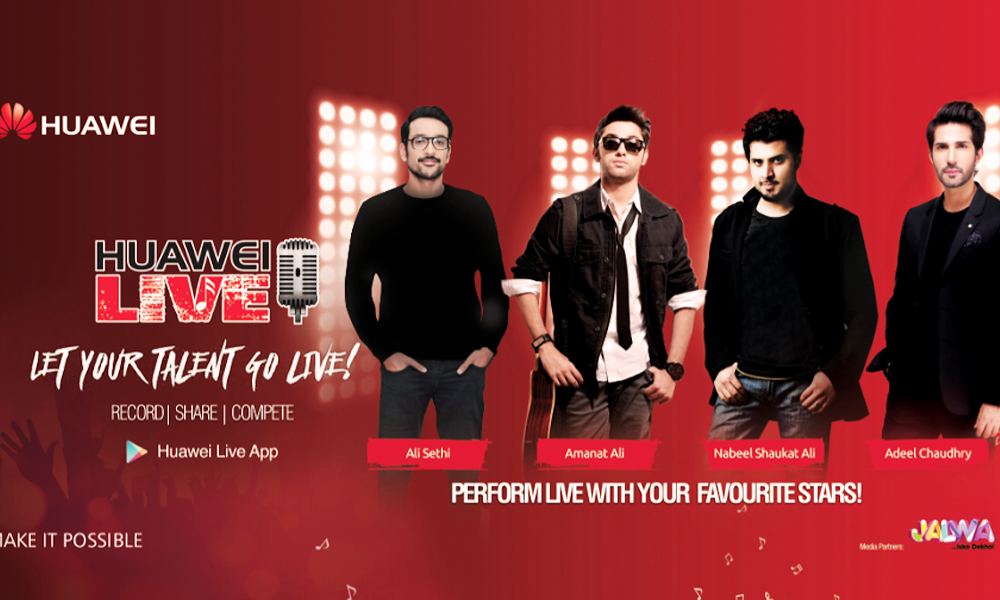 The modern Pakistani youth faces a lack of opportunities or right platforms where they can showcase their Talents. In this endeavor, Huawei has been at the forefront in engaging the youngsters in productive activities. This time around, Huawei has come up with another groundbreaking idea to help the youth showcase their singing talent through its platform “Huawei Live”.

The media is a buzz with excitement over this one of a kind initiative and the hype of Huawei Live has taken the public by storm. Huawei Live has famous singers onboard as judges who are mingling with youngsters by visiting them at their colleges and universities. Adeel Chaudhry, star with a massive fan following, has recently joined the already star-studded judges’ panel which includes heartthrobs of our young generation, Amanat Ali, Ali Sethi and Nabeel Shaukat. Adeel Chaudhry, by profession is a dentist, but his love for art could not keep him confined to his profession, he is a singer-songwriter, actor, and model who appeared in a number of television serials and films.

Huawei has designed the whole campaign in such an immersive way that each step moving closer towards the Huawei Live finale unfolds a new surprise; any day, one of the singers might be face to face at some university singing Live. Huawei Live is not just limited to this exposure; the winner of the contest will have the once in a lifetime opportunities to pursue his/her singing career in the future.

The winner will also get a chance to sing along the judges in the Finale.

How can one be part of this great opportunity? Well, the process is very simple, an eye-catching Float will be on its journey to congregate gifted voices. The float will be stationed at all well-known institutions and markets providing an easy access to those who want to be a part of Huawei Live. But for those of you who somehow could not catch the Float, you can record your songs using Huawei Live application, a mind-blowing app designed just for Huawei Live. This app will not only be used to record songs of potential singers but would also provide coverage and insights

This app will not only be used to record songs of potential singers but would also provide coverage and insights in to the campaign. The songs shortlisted will be uploaded in the Huawei Live application for the audience to rate. The initially shortlisted contenders will be leveled-up to final auditions out of which 3 finalists will be chosen by the judges.

Huawei Live is receiving an overwhelming response from the youth. Students are thrilled and excited for a platform that gives them a chance to show their untapped talent to the world.

Huawei has always believed in being a productive part of the community, and the concept of engaging youth through Huawei Live would not just provide entertainment but would also provide an unparalleled opportunity to those who are passionate about singing. Since the day of its launch, students from every corner of the province, be it male or female, queue up for hours to get a chance of a lifetime to be heard once.

Huawei’s belief is evident through their initiative Huawei Live, that Pakistan is blessed with a hardworking and talented younger generation who can excel in any field, provided they are given a proper platform and guidance to harvest their talents.

The fun has just begun with Huawei Live! Stay tuned for more updates in this mega extravaganza!