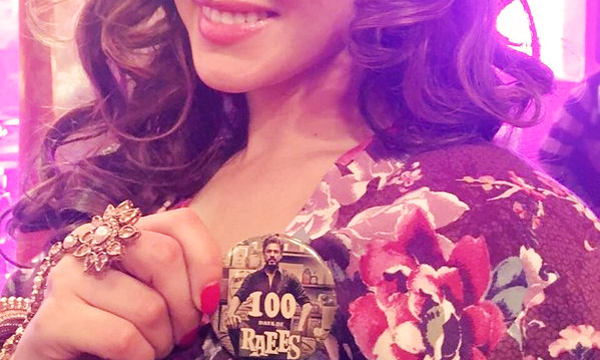 UPDATE: As we all know, Sunny Leone is to shoot a special item number for the upcoming SRK and Mahira Khan Movie Raees. Sunny Leone will be seen dancing to the remixed version of the 70s hit song, Laila O Laila, previously performed by Zeenat Aman.

The excited actress who is performing the dance number with King Khan recently shared a selfie from the sets of Raees; she will be part of the 2-day shoot of the song.

Interestingly enough, Raees had completed 100 days of shooting yesterday. The sultry actress was quite pepped up about the shoot, tweeted a picture of herself donning a special badge in a selfie.

The badge has the picture of Miyaan Bhai Shah Rukh Khan with 100 days written on the badge. Sunny Leone tweeted the following:

So happy I got to be a part of the 100th day of @RaeesTheFilm with @iamsrk @rahuldholakia @ritesh_sid #thegoodlife pic.twitter.com/lnOwAvm4qq

It will definitely be fun to watch SRK and Sunny Leone grooving to Laila O Laila together!

The movie Raees is slated for an Eid release this year.

Sunny Leone, the 34-year-old actress will be shaking a leg with Shah Rukh Khan in Rahul Dholakia’s crime-drama Raees. And the chartbuster they will sizzle to is none other than Qurbani’s “Laila O Laila” which featured Feroz Khan and Zeenat Aman way back when in 1980.

Producer duo Ritesh Sidhwani and Farhan Akhtar, who are fans of the classic number, acquired the rights to Amit Kumar-Kanchan song which is being re-recorded and rendered with faster beats.

“Raees is set in the ’80s and there was need of a song sequence. The makers unanimously selected ‘Laila O Laila’ which perfectly fits with the dark, gangster theme and period. It was suggested to Shah Rukh and it was his idea to get Sunny on board. A lavish set is being created in Mumbai and rehearsals are on in full swing,” reveals a source close to the development.

The makers have planned a similar club set-up as seen in the original 1980 film with Sunny wearing a white, sequinned gown and a feathery headgear as she woos SRK who plays bootlegger Raees Khan.

In the film, his business is eventually thwarted by a police officer – Nawazuddin Siddiqui. Khan’s ladylove is played by Pakistani actress Mahira Khan.

“She (Sunny Leone) will begin shooting for Raees next month. It will be a two-day schedule,” the source adds.

Sunny Leone seems to be getting more and more popular with the A-listers by the day. The actress first did a cameo in Akshay Kumar’s ‘Singh is Bliing,’ then found a strong supporter in Aamir Khan, who made it clear that he has no qualms about working with Sunny, and now the girl is likely to be sharing screen space with Shah Rukh Khan!

SRK Promises Mahira Khan: We Will Look Good in Raees