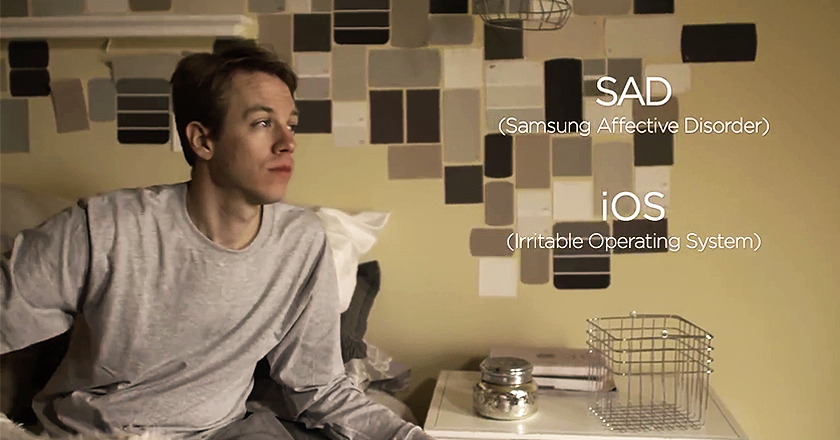 HTC is at it again! This time HTC has resorted to blowing off its competitors and global smartphone market leaders Samsung and Apple by branding them as illnesses. The only funny thing about this ad how hilarious an attempt HTC has made at being funny.

HTC tries too hard every time to produce an attention-grabbing ad, but it always backfires. HTC has employed stars such as Gary Oldman, Robert Downey Jr. and even little green twerking creatures but all to dismay.

Long having a reputation of churning out tasteless, bizarre and plain old weird ads, this time HTC has added another word to its list, offensive.

The ad is for a fictional medicine named Cellami, word-play on the sausage Salami. Portraying a young man living a sad and miserable life, the ad outlines a disorder you might be suffering from called Bi-Phonal Displeasure Disorder. No joys from Apple and neither Samsung are attained if you are suffering from this disorder.

Samsung is highlighted as Samsung Affective Disorder (SAD) and the Irritable Operating System (iOS) is the Apple problem. He is trying to deal with the fact that he has been left depressed after trying both Apple and Samsung.

He struggles with the depression to the point of Cellucide (Suicide! Really?). So HTC thought that poking fun at depression wasn’t cool until you drag out the suicide part. Bravo!

Taking Cellami (aka matalidone Boomsoundide) however has disastrous side effects such as blue teeth, permanent thumb loss and oily plastic discharge.

So if you are still watching the miserable ad, it takes a painstakingly 1 minute and 25 seconds until the ad unveils that if you are taking the HTC One M9, you are in no need of taking Cellami. Why? Because as HTC declares it, ‘your phone is the best’.

See the painstakingly horrible ad below: