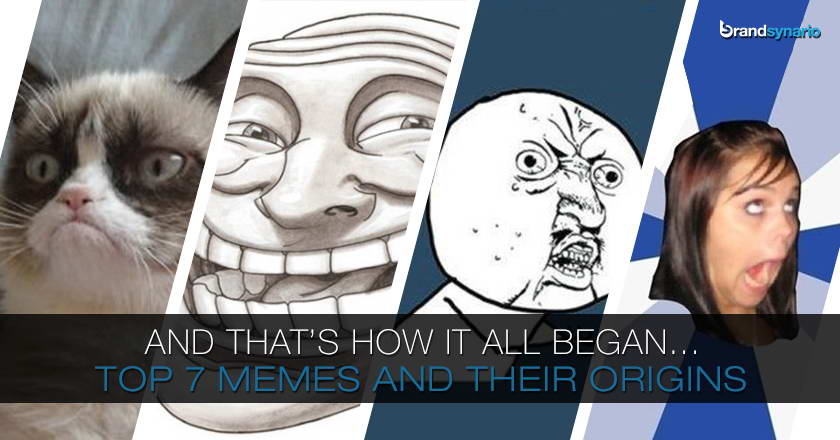 Ever wasted your time pondering about the word “Meme” and its origin? More than that, ever wondered what exactly is the correct pronunciation? Mee-me, memi or mem?

Well, let me help you with this. The word ‘Meme’ is derived from a Greek work which means something imitated or copied and it’s pronounced as “Meem”.

Let’s take a look down the memory lane and see how the most viral memes actually began:

Overly attached girlfriend is one of the most famous memes we have come across. The snap was dragged out from a YouTube video in which a girl sang a rendition of Justin Bieber’s song, “Boyfriend”.

Well, it’s quite evident that the over attached girlfriend is cute in reality and her name is Laina Walker.

This picture, taken from a 7th-grade yearbook belongs to a boy call Kayles. After submitting his photograph to Reddit, he received 3,500 comments.

Kyle’s principle asked him to retake a photo for the yearbook because she thought he made that face intentionally, but I am sure she must have realized her mistake after viewing his other picture.

Yes, the BC Billi we all love has around one million twitter followers (more than many famous actors) and her real name is “Tard”.  Tard’s first photo was submitted to Reddit by her owner’s brother.

Here’s a glimpse from the initial Grumpy cat YouTube video.

The original image was posted in an archived thread titled “Facebook Whore Comics” while the meme was posted to Reddit later.

The most shared of all ‘Bitch Please’ fellow is actually a rage comic drawing of a professional basketball player, Yao Ming.

The expression conveys a dismissive attitude towards somebody’s stupid remark or unworthy discussion.

The Troll face hit the internet by storm since 2008 and is undoubtedly more popular and older than the iPad or iPhone you possess.

It is a drawing of a cheeky fellow with wrinkles all over his face delivering signature phrases like “U MAD?” or “PROBLEM?”

This meme is commonly used to express frustration for someone who is not able to do something. It is taken from a Japanese manga series and is based on a character named Hiroya Oku which can be seen below.

Watch the video here to see some more viral memes and their origins.