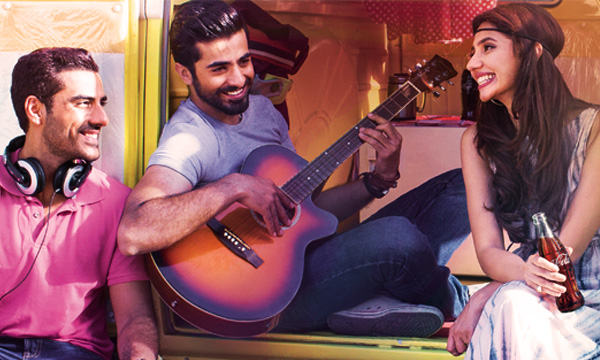 Promising a fun and frolic flick, the plot appears to share a whiff of a deep message and a dash of a profound story line. From the looks of its trailer, it seems that the tale of Manizeh, Nadir and Arhaan will be highlighting core issues faced by youngsters while breaking some major stereotypes thriving in our society today.

With its star-studded premiere in the big cities of Lahore and Karachi, reviews from the critics and celebrities have started pouring in on social media.

View pictures of the stars spotted at the red carpet of Ho Mann Jahaan from both the premieres.

Let’s take a tour of Twitter town and see what viewers at the exclusive showcase of the movie have to say.

#HoMannJahaan we at #ebuzztoday would rate the movie 9/10. Go with ur loved ones, friends or family everyone will love it @TheMahiraKhan

I rate the movie 4.7/5 ! I am in love with the movie and ready to watch it again #HoMannJahaan

Super reviews coming in from all sectors for #HoMannJahaan. This one will rock at boxoffice. Kudos to makers. @Jerjees @TheMahiraKhan

@latchingonto @ABobby9100 I would rate #HoMannJahaan 4/5 purely out of love for excellent cinematic work & great songs.

First review is out….and it’s a thumbs up for #HoMannJahaan !! https://t.co/zAGLQN1XES

Mini review after attending the premiere of #homannjahaan : I can proudly say that our… https://t.co/8ELww6FmPX

Singers , cast , designer all r amazing. Ufff… so many reasons to watch this film. #HoMannJahaan

@Umairmirza It is in between nice and good. Story should be less predictable. But its super positive and clean family movie. #HoMannJahaan

@TheMahiraKhan looked & acted well as a college going girl but in tense scenes, the acting seemed similar as #BinRoye #HoMannJahaan

#HoMannJahaan is a lovely movie! although a bit dragged & lengthy but it has some great acting, beautiful cameos, best songs & good message.

Love it or hate it, #HoMannJahaan just showed how effortlessly gorgeous Pakistanis are 😍

I love movies and made in Pakistan stuff and #HoMannJahaan does it beautifully. Good movie. Congrats to the team 🇵🇰 pic.twitter.com/2m7svVcV71

#HoMannJahaan Finally the show ends & all the applause, cherish and claps for asimrazatvf and his… https://t.co/y0AyQZ4bPv

Will 2016’s musical extravaganza of a movie, Ho Mann Jahaan be successful in hitting the right chords in the hearts of Pakistan’s movie-buffs? Share your views in the comments below.