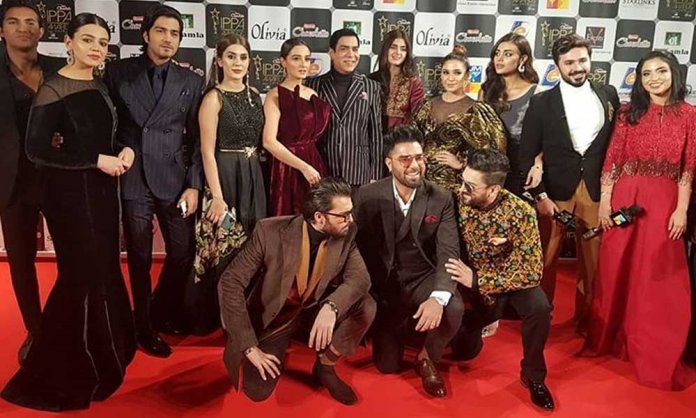 After the huge success of IPPA, International Pakistan Prestige Awards in London in 2017 and 2018. This year IPPA traveled to Oslo, Norway for its 3rd year. Over 50 Celebrities from Pakistani Film, TV, Music and Fashion Industry featured in this year’s biggest Pakistani showbiz awards ceremony.

The awards were presented to the winners from Film, TV Dramas, Music and Fashion Industry nominated by all the major Pakistan TV Channel. With Scintillating Singing and Dance performance by your favorite celebs!

With the year’s most-coveted designers, top models, and stylish celebrities all gathered in one place, it’s no surprise that the evening’s red carpet was filled with standout fashion moments – including some snow-ready dressed and coats!

Have a look at our selection of celebs who had the best looks.

We’re totally digging Kanwal’s pencil skirt and sparkly top in which she’s dressed to kill. The loose waves add a beautiful touch to the attire. The diva also won an award for the best model of the year.

Sheikh looks like a vision in this red velvet gown and a low chic bun. The actress has a pulled a bare minimum look and still managed to look exquisite.

Hussain looks dapper in a four-piece suit at the IPPA Awards and no doubt he looks sharp. The actor also won the best TV presenter of the year viewer’s choice award.

The singer who won the award of the best female vocalist of the year donned in a gorgeous ivory dress with pearls and sequence which we have our eyes on!

Rocking a prince coat – Azfar looks very classy which is why the actor made it to our list! We’re also loving the detail on his coat which jus stands it out.

Hira looks ethereal in this beautiful maroon attire and she’s certainly rocking the desi look! Hira sure is an epitome of grace and elegance.

Let us know which ones your fav!