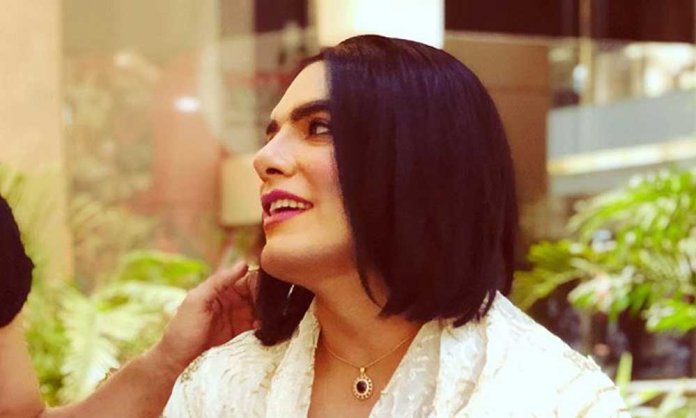 Ever since the handsome hunk Yasir Hussain revealed his first look from his upcoming telefilm ‘Help me Durdana’, it has become the talk of the town.

Reportedly, the actor will be essaying the role of a mother and critics are applauding him for choosing an unconventional character.

However, things went south after Yasir replied to a hater with an insensitive comment.

The ‘Karachi Se Lahore’ actor faced the heat when one of his followers pointed out why the project did not showcase a real transgender to which he replied:

Yasir Hussain is such an idiot , sick & a goth!!! I mean, got no words for this piece of the most rotten junk of this universe!
SHAME ! pic.twitter.com/oj32c1B0xy

Later, the actor took to his Instagram account to give clarification and stated that his role has nothing to do with humiliating or mocking anyone.

I just wanted to clear the misconceptions that some people have about my recent role. The images that you have seen over social media of me wearing a Saree are for a project in which I am playing the role of my mother. I am not playing the role of a transgender and by no means do I ever want to disrespect a gender that I have immense regard for. Once the show is out you will be able to understand the character better and will know that my role has nothing to do with humiliating or mocking anyone. We as public figures receive a lot of retaliation/negative comments and just because I chose to reply to a comment with a joke does not in any way mean that I have no respect for a certain gender. Other negative comments that we receive are never made a controversy out of so this also shouldn’t be. It is just a character intended for humour and nothing else. Hope this clears the doubts that some people have. #yasirhussain #durdana #respectforallgenders

Yasir’s rumored girlfriend, Iqra Aziz defended the actor and gave an aggressive reply to all the haters.

@yasir.hussain131 has an amazing skill of performing art in a whole different way that’s why he always experiment different characters the recent controversy i have seen against him i know him quite well he can never disrespect any transgender or a woman. We as actors receive alot of criticism and feed back positive and negative both on social media which is good thing but decency should be considered both ways 🙏 @yasir.hussain131 Eagerly waiting for this one @arydigital.tv

There were also a number of celebrities who supported the actor and sent their best wishes for the new avatar.

Have a look at what celebrities have to say!