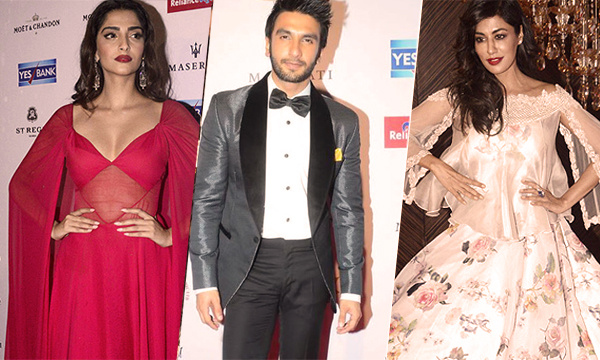 The was a star studded event; held on April 11th, Monday, the event was graced by the presence of famous celebrities of Bollywood including the likes of Ranveer Singh, Amitabh Bachchan, Sonam Kapoor, Anil Kapoor, Rishi Kapoor and many others.

Sonam Kapoor won the Critics Choice Awards Best Actress of The Year and was spotted in a red chiffon gown by Naeem Khan. Aishwarya Rai Bachchan was snapped in a chic Amit Aggrawal gown and was awarded the Glamour Icon of The Year. The event was attended by other prominent celebs such as Ranveer Singh, Athiya Shetty, Amitabh Bachchan and Sidharth Malhotra.

Ranveer Singh was awarded with the Superstar Of The Year and looked absolutely dapper in a suit.

Check out the pictures from the starry Hello! Hall of Fame Awards 2016 night below: From Ranveer Singh’s energetic dance moves to the unforgettable ‘Malhari’ dance, the night was a truly memorable one indeed.