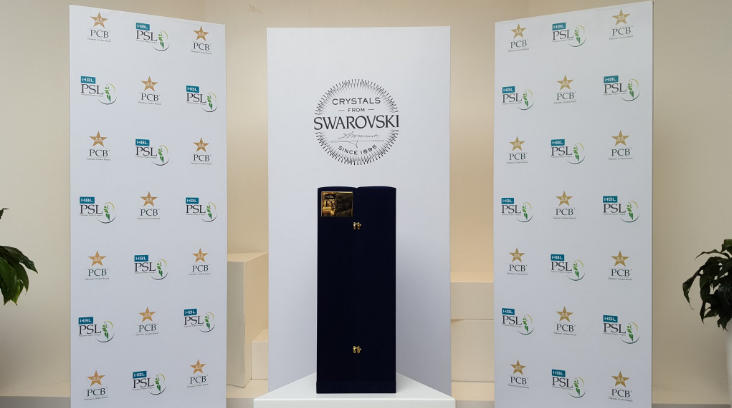 The HBL Pakistan Super League (PSL) Season 2 trophy has finally been unveiled at Dubai! Known as ‘The Spirit Trophy’, this beauty has been encrusted with 50,000 crystals to glitter and glam the winners of PSL 2017.

Chairman Najam Sethi was accompanied by the skippers of all 5 teams to unveil the sight everyone was waiting for. Along with the winner’s trophy, the Fazal Mehmood Award for the best bowler, Imtiaz Ahmed Award for the best wicketkeeper, Man of the Tournament Award, and The Hanif Mohammad Award for the Best Batsman were also revealed.

It took 4 months and 50,000 double pointed crystal fine-rocks from Swarovski to create the trophy for season 2, which looks like this:

The trophy represents love from Pakistan, as one nation, which cannot even be summed up by the entire galaxy for the game of cricket. Taking its inspiration from the brilliance of the universe- the trophy’s central core resembles the galaxy of stars with a shooting star rising above and a golden crescent behind it.

The skipper of the defending champions, Islamabad United’s Misbah-ul-Haq, along with skippers of Lahore Qalandar and Karachi Kings, Brendon McCullum and Kumar Sangakkara unveiled the ‘Hanif Muhammad Best Batsman Trophy’.

Man of the Tournament

‘The Man of the Tournament’s Trophy’, a crystallised Raising Star was unveiled by Karachi Kings’ former captain Shoaib Malik.

The fight for the crystal-studded trophy starts on 9th February as defending champions Islamabad United will go face-to-face with Peshawar Zalmi at 9:00 PM!