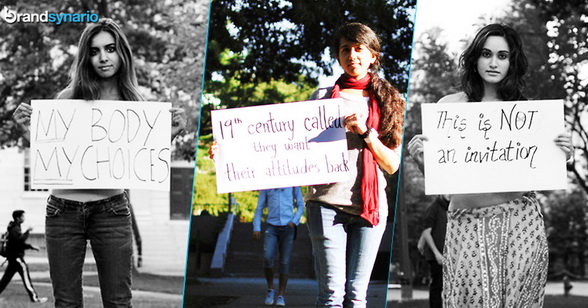 No matter how much we try to boast the fact that we are living in a world of equality and enlightenment,  there are some parts of the world where the worth of a female, regardless of her age, is considered to be way less than that of a man.

Unfortunately, we live in a region where such sordid and unfortunate perspective prevails.

In developing countries, every second of a women’s life is spent under a constant spotlight – surrounded by endless eyes that pierce their body with pestering stares. Women suffers on all grounds, from something as regular as cyber stalking to something as vicious as gang rapes, the harassment that the female population of the country face on a daily basis needs to be addressed, straightaway.

To address this ignoble issue, some Indian students from Harvard have started off a trend; to create some awareness in the society.

They have started posting a series of photographs; holding play cards carrying a message on them. Some of these students chose to be top less in their photos but the message that they all wanted to convey was pure and simple “A Woman’s Body is Her Own.”

Have a look at the photographs below:

So what do you think of their outrageous initiative; do tell us in the comment section below.