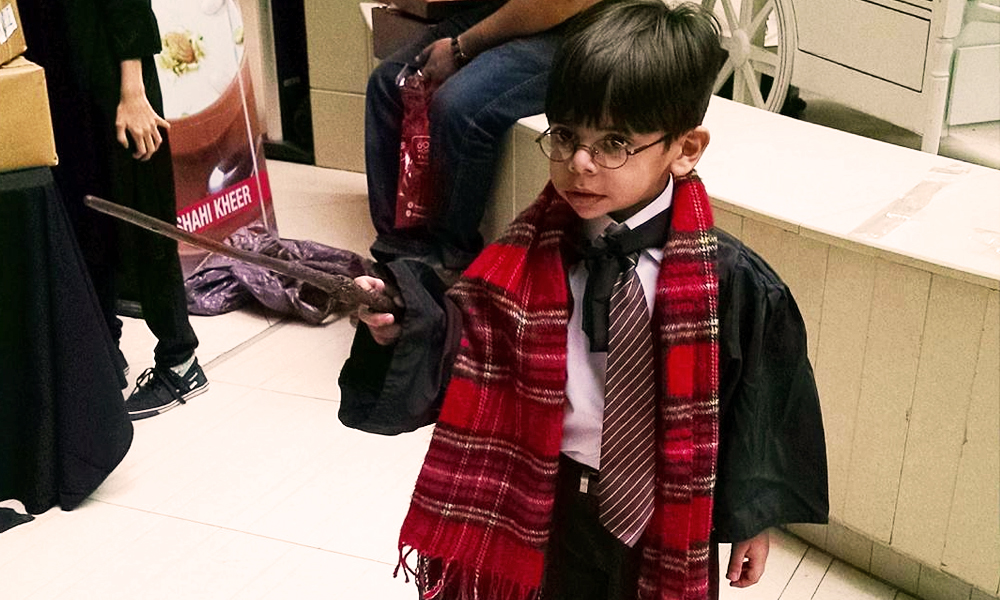 One of the most awaited books on earth, “Harry Potter and the Cursed Child” has finally hit stores and as expected fans are flocking to the nearest bookstores to grab their copy. Harry Potter and the Cursed Child was a West-End stage play of two parts. The writer was Jack Thornes and the concept was based on the original new story by John Tiffany, J.K Rowling, and Throne.

Harry Potter and the Cursed Child is now available for the passionate Harry Potter fans all over the world- the book launch event was recently held in Pakistani at the Dolmen City Mall, Karachi. The production of the play was scheduled to officially premiere on 30th July 2016 – the previews had already begun at the Palace Theatre, London on 7th June 2016.

It has already been clarified by J.K Rowling last year that the series “Harry Potter and the Cursed Child” is not a prequel to the earlier 7 books.

Children, adults, fans and book lovers, all gathered at the DMC Karachi at the book launch- the place was packed with people dressed up as Harry Potter, high on excitement and fervor.

There was a 10-year-old boy at the event who read the book in a just 59 minutes and rated the book a 6 out of 10! It has also been informed by J.K Rowling that this book is going to be the last Harry Potter book.

See how Twitter was buzzing with excitement and joy:

Today was legit Quaffle scores. Thank you @LibertyBooks_ and #dolmenmall 😀

Is it like Eid for #HarryPotter fans today? #DolmenMall

There are so many here and there is so much everyone is getting today!
Hint : Harry Potter fans#DolmenMall pic.twitter.com/a5efTPDexM

Moaning Myrtle came along to join in the festivities this morning! Even though the party's over, you can head over to our outlets or www.libertybooks.com to get your copy of Harry Potter & the Cursed Child! #LibertyLaunchesHP #HarryPotter #LibertyBooks #DolmenMall

The costumes and the dress up game is too damn high, all for the love of Harry Potter at #DolmenMall pic.twitter.com/z03UFWxqXr

HARRY POTTER AND THE CURSED CHILD.🌟 Today liberty books has launched the most awaited and loved book people are going crazyyyy😍 who wouldn't be ehh? Its been so thrilling to see hundreds of people lined up outside the store at 8:00 A.M in the morning.❤ There are books, props, shirts, cake, Q/A session and many more. Anyone who's residing in karachi and still hasn't gone to pick up their piece, i say GO GO GOO!!! (Sadly i don't live there). If you want to take a heavenly glimpse of today's gala, add them on snapchat: #LibertyBooks 📚

This magical young witch picked up her copy today! Get yours now at any of our outlets, or head to www.libertybooks.com! #LibertyLaunchesHP #LibertyBooks #HarryPotter #DolmenMall