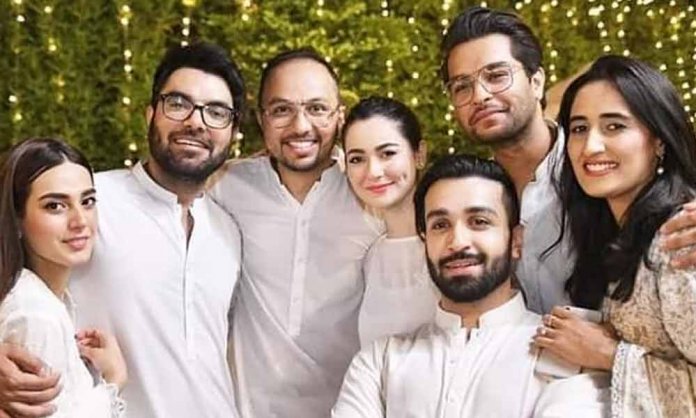 The guest-list of the party unsurprisingly included the industry’s key figures from actors to models and designers making an appearance.

Surprisingly, Hania Aamir, Asim Azhar, Yasir Hussain, and Iqra Aziz were snapped all together in the party and they all look really happy in the picture.

Many of their fans and followers were left just curious to know if both the war between the couples has come to an end or not.

Here is the picture!

Moreover, another video has surfaced online where Iqra Aziz and Asad Siddiqui can be seen hugging and denying all the rumors of their clash.

Later, the ace Pakistani model Sadaf Kanwal posted a picture with the couples and took a hilarious dig to them.

Have a look at the picture!

For those who don’t know, the feud started when Hania Aamir shared her battle with unacceptable beauty standards of our society and her struggle with anxiety.

Soon after her post, the Lahore se Aagay actor Yasir Hussain called Hania ‘Danedar’ and that’s how a verbal spat commenced between the two celebrities.