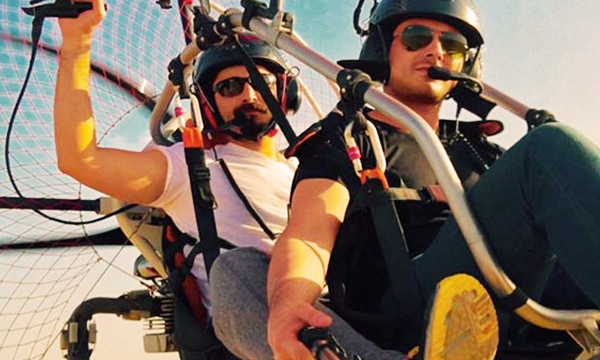 Hamza Ali Abbasi of Pyaray Afzal fame and the King of Social media is now a pilot! Besides stealing our hearts as Salahuddin in Mann Mayal and being a social media celebrity, the actor now also knows how to fly an ultralight aircraft.

Hamza Ali Abbasi and Bilal Lashari were recently spotted taking a flight in micro-light aircraft, where Abbasi is a pilot and Lashari is his passenger.

Both Abbasi and Lashari are good friends and their friendship is not hidden from anyone. They are often spotted together be it attending PTI’s dharna or doing a film together, these two take their friendship everywhere they go.

This time around, Abbasi showed a fun side of their friendship through a short video in which the two are in an adventurous mood and taking a flight in an ultra-light aircraft.

Hamza Ali Abbasi posted this video on his Facebook account where he is confidently piloting this light aircraft and Bilal Lashari is looking quite nervous to be his passenger.

Our Pyaray Afzal flew an ultralight aircraft up to 2000 ft in the air and seems to be enjoying this ride. Abbasi is known for interacting with his fans by speaking about controversial aspects of the society and political issues through social media, but by posting this video he has shown that he truly knows how to enjoy life.