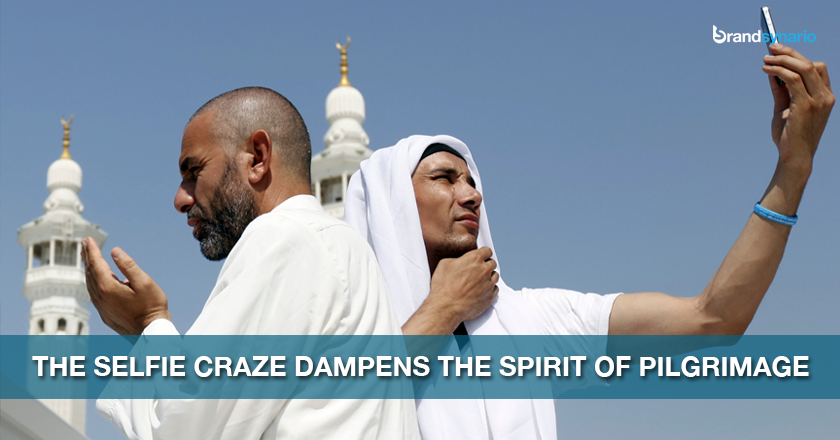 There is no better sight for believing Muslims than witnessing millions of their fellow Muslims from all across the globe gathered in one place, reciting in unison the chant of Hajj ‘Labbaik! Allahumma Labbaik! – Here I am at your service O Allah, here I am!’

Many Muslims can only dream about performing this spiritual exercise of the mind and body that requires a significant amount of financial sacrifice. For many, this is an once-in-a-lifetime opportunity to witness the Holy Land of our Prophet, Makkah and Madinah, and perform their obligation of Hajj.

Many Muslims like to capture every moment of their journey in their minds and hearts. However, as it turns out, many Muslims at this year’s Hajj have been using their phones to take their ‘selfies’ in the midst of huge crowds of men and women who are busy in performing their Hajj duties, as probable mementos of their journey to the Holy Land, an act which has been heavily criticized by some religious scholars.

Photography, itself, has been a constant subject of debate amongst some factions of the Muslim scholars’ fraternity, with some scholars claiming that it is permissible to take photos only if there is a legitimate reason to capture an image.

However, photography of all kinds, especially self-photography, distracts a person from the essence and true meaning of performing Hajj, which revolves around being extremely humble, sincere, and devotedly following the Sunnah of the Holy Prophet PBUH.

Taking selfies is a form boasting and showing-off – vices that are forbidden in Islam and especially during the performance of Hajj.

Pilgrims have been seen taking selfies in Masjid al-Haram, with the Kaaba in their background, which they later upload onto their social media accounts, ruining their Ibadah in the process, thanks to this act of ‘humble-bragging’.

Mobile phones and cameras were not allowed inside the premises of the holy mosques a few years ago, where there were numerous reported incidents of mosque guards confiscating and breaking these gadgets on sight.

However, the rules have been relaxed now and that is why it has become increasingly difficult for anyone to stop the pilgrims from taking their own pictures, considering the number of people that visit the mosques during Hajj and also throughout the year for Umrah.

Muslims should be aware that Hajj is a spiritual journey that washes all their sins away if performed according to the standards set by the Holy Prophet PBUH. Engaging themselves in this selfie-craze on such a Devine journey and ruining their Ibadah is an unintelligent act of stupidity.