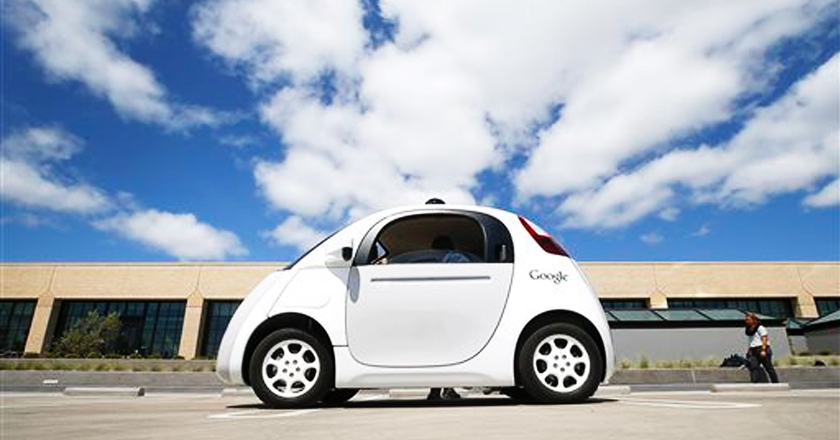 While we wait in our cars in long lines for fuel refills, the world will soon be enjoying Google’s self-driving cars.

The technology giant, with a mission to provide self-driving cars to the public by 2020, has finally created a prototype safe enough to hit the public streets. The latest self-driving car prototype will be making its public roads debut at the streets of Mountain View, California, this summer.

The electrically operated driverless car does not need gas, steering wheel or even a pedal to drive as claimed by the company, however, it has a removable steering wheel and a brake pedal in the prototype as per the regulations of the state of California. However, it does not contain airbags and other safety features usually required by the law.

The latest prototype is shaped like a pod, with two seats with a black, shine bowler hat on top to conceal its sensors. The sensors help the car to detect road hazards and drive and brake as needed without human intervention. The car can only drive up to the speed of 25 miles/hour since it lacks safety features in its built and needs to be charged every 80 miles. Moreover, this car can only drive in areas that are thoroughly mapped by Google Maps.

For now the company has plans to build only 25 such cars and test them in the area surrounding its Mountain View headquarters. However, as success follows through, Google will design and test cars in other topographical regions for further assessment.

Google’s aim behind the development of these cars is to diminish the number of accidents due to human errors, which account for over 90% of road accidents, to make traffic seamless and to help provide modes of transportation to disabled and elderly people.

While the idea is all good and strong, Google does not aim to tap into the automobiles market.

Traditional automobile companies had a similar idea in mind, but their intended time frame to develop it was over the next 10 to 15 years. Google has essentially just accelerated the developing stage and intends for its technology to be used by car companies instead of developing their own.

The mastermind behind the project, Chris Urmson, claims this prototype to be just a bridge to what’s coming in the future. The actual cars rolled out for public later during the decade might not even look like what we will see on roads soon since the current one is just a tester to iron out all glitches.

One of the major problems Google is facing and will probably continue to face till its successful public launch of self-driving cars will be convincing the public that these cars are actually safer than human-driven cars. According to Google, in the past six years of testing, these cars have driven over 1.7 million miles with only 11 minor accidents, a stat Google is proud of.

While the concerns of the public are genuine, Google is trying its best to make the car as safe as possible.

Traditional automobile companies like Mercedes-Benz and Infiniti are introducing automatic features in their cars one by one to slowly move to the road of driverless cars but Google has taken on the “moon shot” strategy to bring the self-driving car in one go.

This does not only make it difficult for Google to convince the public to adopt the new technology, but it also makes it riskier too. However, in times where hotels are starting to use robots for servicing their guests, it’s only plausible that cars eliminate the need for drivers immediately too.