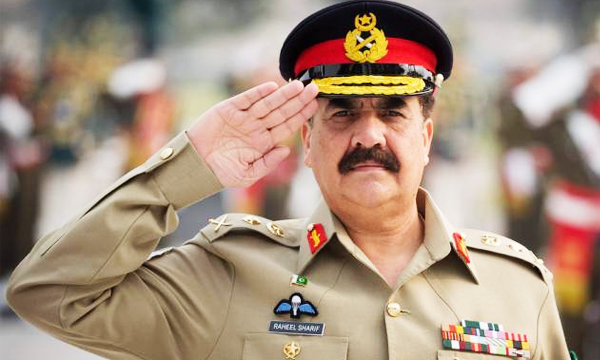 Even during his exit, General Raheel Sharif made sure to leave with impact! Outgoing military chief of Pakistan, warned India against adopting an aggressive stance in Kashmir during his final speech, as he handed over power to successor COAS General Qamar Javed Bajwa.

Sharif cautioned India against perceiving “restraint” of Pakistan over the ongoing Kashmir disputes as a weakness! At a vibrant and colorful ceremony held at Army Hockey Stadium, Rawalpindi, General Raheel Sharif welcomed the incoming, 57-year-old Bajwa chief as he handed over power of the world’s sixth-largest army by troop numbers.

“I want to make it clear to India that considering our policy of restraint a weakness would be dangerous for her,” he said receiving massive applause.

“This is a reality that in South Asia, lasting peace and progress is impossible without solution of the Kashmir issue. For that, international community’s special attention is necessary,” added Sharif.

Soaring tensions between both the neighboring nations have aggravated after a deadly attack on Indian army base occurred back in September and New Delhi accused the Pakistan-based militants.  India then responded by conducting surgical strikes across the border, sparking raging anger from Islamabad- Pakistan denied any such strikes. Many Pakistanis called for Sharif to extend his term as he stepped down from his three-year tenure on Saturday.

Uniformed soldiers marched while military bands played at the ceremony on Tuesday- the outgoing chief handed a wooden cane over to Gen. Bajwa, his successor as a symbol of power.

Twitterati expressed their emotions all over while #ThankyouRaheelSharif trended on Twitter:

Thankyou Raheel Sharif.Congrats to Gen Qamar Bajwa for assuming command of one of the best Armed Forces of the world. #ThankYouRaheelSharif

What an honourable departure of brave General Raheel. Setting high standards for his followers. May GOD bless you , #RaheelSharif pic.twitter.com/vIFCoKh5XQ

He served us to the best of his abilities under Pakistan's Constitution.The world will never see another one like him.Farewell #RaheelSharif pic.twitter.com/z11qyvScig

Gen #RaheelSharif will never Retire from our Minds, Hearts & Prayers even after Change of Command #ThankYouRaheelSharif

Gen #RaheelSharif will never Retire from our Minds, Hearts & Prayers even after Change of Command #ThankYouRaheelSharif

#ThankYouRaheelSharif
I am happy for you #RaheelSharif**** dat you retired with honour and prestige.
Its been rare in forces before you.

Have something to add to this story? Comment below.Stay tuned to Brandsynario for more news & updates!