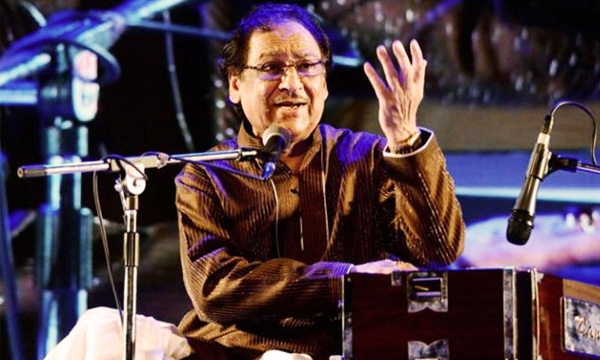 Despite the volleyball of verbal attacks Ghulam Ali faced in India by Shiv Sena, the Ghazal guru continues to step ahead and is now all set to making a big acting debut in Bollywood movie, Ghar Wapsi.

Apart from Ghulam Ali, the film casts Alok Nath, Farida Jalal, Reema Lagoo, Deepak Tijori and Zarina Wahab. The directorial endeavor of Suhaib Ilyasi, the feature film Ghar Wapsi will not only unveil his talent as an actor but will include his flair as the world-class ghazal singer as well. A patriotic title song has been composed for the movie and Ghulam Ali will be lending his vocals to the tune. Also, Sunidhi Chauhan, Sonu Nigam, and Shaan are the in the set of singers, there are more melodies in the movie like ‘Apni Mitti Ki Khushboo Hain Rago Mein Yeh Basi Hai’, ‘Choomenge Isko Shaan Se’, ‘Humko Toh Pyaara Hain Yeh Watan’ and ‘Apni Jaan Se’ which includes the classical voice of the Pakistani Ghazal master.

Currently, he is in India to dub his dialogues and will head to Mumbai city on 29th January  for the music launch.

“If I keep on doing this for three to four more days, I can be a (professional) actor. I guess singing is very easy”, revealed a much-excited Ali to IANS  during his dubbing sessions.

Just last week in Kolkata, Ghulam Ali performed at a concert which was cancelled 3 months back due to rising protests by Shiv Sena. Seems, the veteran vocalist is determined to prove himself in India and will not be discouraged by any threats on his way.