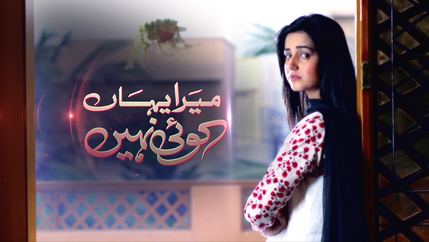 Mera Yahan Koi Nahi, an all-new drama on GEO TV, revolves around an uncertain father-daughter relationship. Written by Nusrat Jabeen and directed by Mohsin Mirza, director of “Aasmanon Pe Likha”, the show has been on the air since the 15th of August.

Starring Farhan Ali Agha, Anum Fayyaz, Zainab Qayyum, Nida Khan and others, the show moves away from the typical husband wife problems and focuses more on the father-daughter relationship.

Listen to the OST below:

Agha, playing the father, denies the relation he has with his daughter from his first marriage, played by Anum Fayyaz. Agha is reluctant to disclose to the world the fact that he secretly married someone else before and had a daughter.

To keep up appearances, he introduces his daughter as the daughter of a friend. Anum faces loneliness as she has no one to support her in times of her highs and lows.

Will Agha ever be able to own up to being Anum’s father? What would be the reaction of Agha’s second wife and daughter after the truth comes out? Will the odds ever be in her favor?

MeraYahan Koi Nahi airs every Friday & Saturday at 8 pm only on GEO TV.