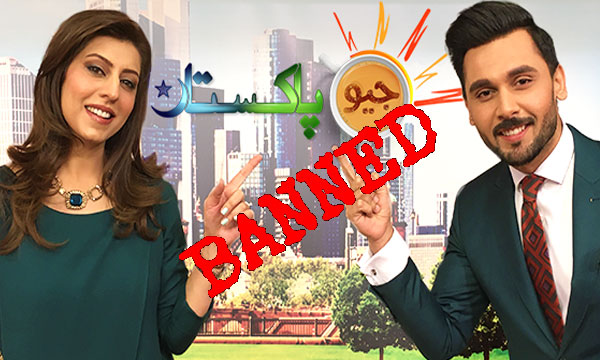 2017 is definitely becoming the year of ‘bans’, with various bans across the globe we now have one more restriction to add to our list. Pakistan Electronic Media Regulatory Authority Islamabad (PEMRA) has issued a notice to Geo TV and banned their morning show Geo Pakistan.

Here’s the Notice issued by PEMRA PEMRA made the decision based on the indecent content aired on the program and has now banned the show for 5 days from April, 3rd to April, 7th. According to the statement by PEMRA a fine of Rs. 1 million has also been imposed on Geo News and the channel for violating Electronic Media Code of Conduct 2015.

PEMRA seems to be on a roll, the regulatory authority also banned Amir Liaquat for his show ‘Aisay Nahi Chalay Ga’ on Bol News for the show aired on 27th January. The scholar was issued a notice by PEMRA that asked him to apologize for his statements and the network was fined PKR 1 Million.

Aamir Liaquat Lands Himself in Trouble With PEMRA, Again!

Sahir Lodhi’s TV show, ‘Aap Ka Sahir’ was sent a notice by PEMRA for showing a vulgar dance between the Raasta actor and a woman on the set. TV One was fined PKR 1 Million for the indecent content.